Estate agents claim that there are only three things that sell a property - Location, location and location. No - we’re not looking to buy property here, (although we could easily be persuaded). It is the numerous ancient castles of this region to which we refer.
But first, a quick history lesson.
This part of Languedoc Roussillon is known as Cathar Country because, about 900 years ago, groups of travelling apostles persuaded many of the locals that the Catholic Church had strayed from the correct teachings of god and that they could only be saved by becoming “Good Christians" again. These “Born Again” evangelicals called themselves “Bon Hommes” or “Good Men” but the Catholics called them Albigensians and sent an army to destroy them. From 1209 to 1229 thousands of Cathars were rounded up and burnt to death in mass executions. However, the Cathars continued to flourish so the Pope introduced the Inquisition whereby specially selected Monks would torture suspects until they admitted their sins and could be lawfully burnt at the stake. After 1244, when more than 200 Cathars were burnt to death on a single fire, many others went underground or fled.

Now - back to the incredible castles of Languedoc Roussillon . During the time of the Catholic crusade against the Cathars, many of the heretics sought refuge in the castles that had been built in the 8th and 9th Centuries to protect France from Aragon, ( now northern Spain - Remember Henry VIII’s wife, Catherine of Aragon?).
Here are a just a few of the many we have seen…. 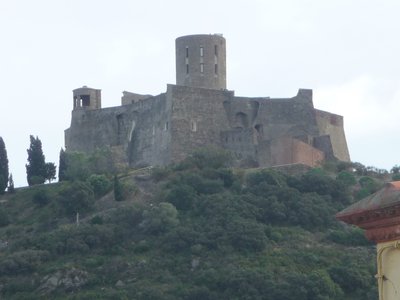 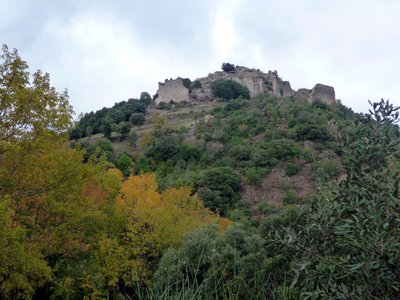 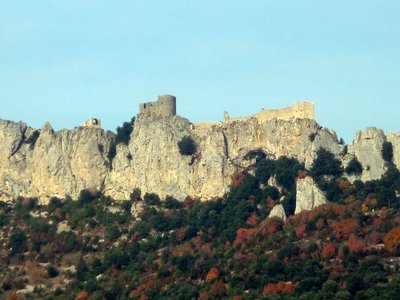 This one is called Chateau de Queribus - it stands on top of a two thousand foot high mountain. 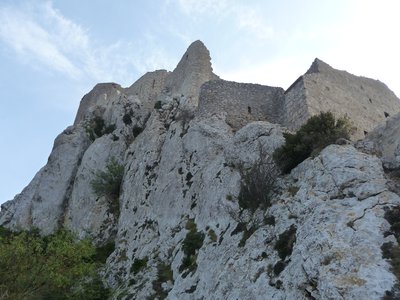 The view of the Pyrenees from the top is incredible…. 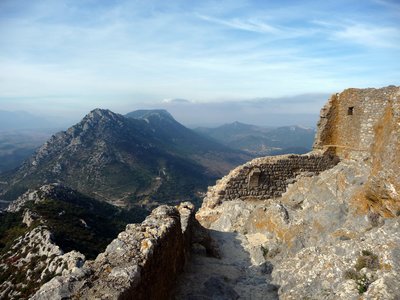 But back to the bit about the importance of location. Building a castle on a mountain top was a great way to stop invaders from getting in, but, as the Cathars discovered, once the enemy had you completely surrounded they could simply starve you out. Most of the castles were taken by siege and as the starved Cathars surrendered they were led straight to the bonfires. The Catholic inquisitions and burnings continued for nearly a hundred years until the last four suspected Cathars were burnt at the stake in Carcassonne in 1329.
Here is Carcassonne Castle …perhaps the most majestic of them all. 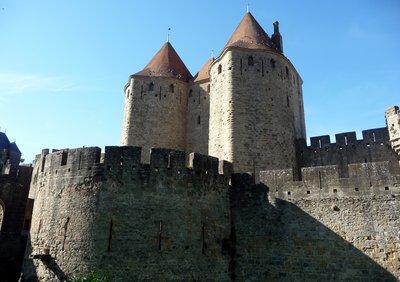 Posted by Hawkson 09:13 Archived in France

Thanks for the history lesson. By the way if you should decided to purchase a castle or two, we would be willing to house-sit there. Camilla also fancies the challenge of defending a castle against little invaders.

Wow! You guys sure do your homework....very impressive indeed. I'm in Winnipeg with Allyson & Sam till Nov. 13th. No historical snowstorms to report as yet..
hugs
Sharron