Our delightful neighbour, Arlette, has been popping by every night with bags of chestnuts. But we are Canadian and therefore culturally too damn polite to tell her that we simply can’t stomach another roasted chestnut… ever! So whenever she comes to the door with another bagful we thank her profusely and take them. By last Friday we had so many chestnuts we considered taking a stall at the weekend’s Fete de Chataignier; the annual Chestnut Festival in the nearby village of Villedonnel. But could we compete with these professional roasters? 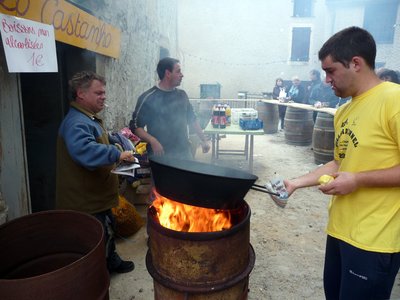 You can definitely have too much of a good thing. However, despite the fact that all of the roadsides and woodland paths are knee deep in fallen chestnuts this stallholder at the Festival was trying to make a buck. 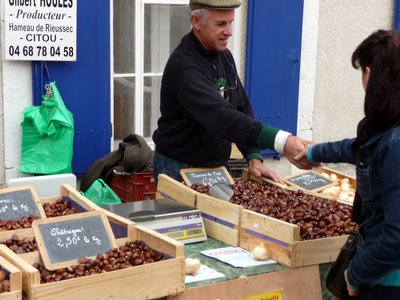 But chestnuts were not the only local produce at this fall festival. There was bread…. 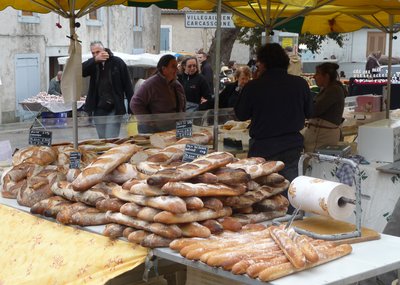 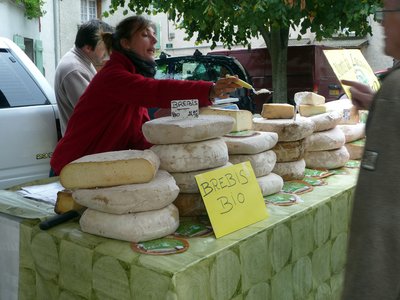 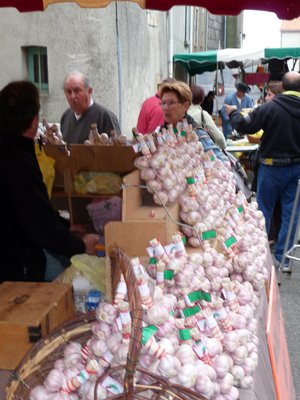 There were all manner of produce and local handicrafts and, of course, the wine for which this region is so famous. Here is the Chevalier de degustation offering us a taste of his late-harvested muscatel. 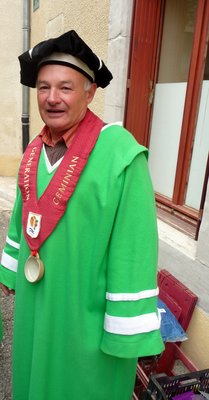 We had a great afternoon at the chestnut festival, although we turned down many offers of roasted chestnuts.

Now back to the chestnut lady.
Our stock of chestnuts grew daily and we hadn’t the heart to throw them away. Jim’s son, daughter-in-law and granddaughter visited us for a few days last week and returned to Provence with a car full, and future renters of our holiday home may well find them stuffed in cupboards and wardrobes or even under the mattresses. Here’s Friday’s gift …a heap of the freshest, sweetest chestnuts that you will ever taste … 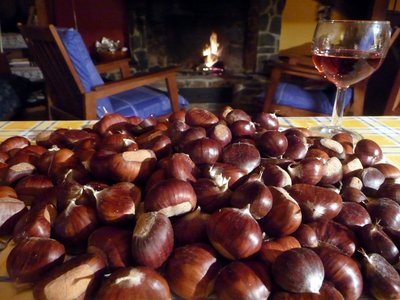 We noticed last week that the supermarkets were selling chrysanthemums in a myriad of beautiful colours, so we bought a huge pot of orangey-red ones as a gift for our chestnut lady. She was absolutely delighted, she claimed, but we wondered why she didn’t put them alongside her other pot plants in front of her house.
“I put them in my garden,” she explained later and we thought no more of it - until ….wait for the punch line …. We went for a walk on Sunday morning and found that every single grave in every cemetery was adorned with a pot of chrysanthemums. Yes, dear reader, Saturday was All Souls Day, the day the French honour their dead by placing chrysanthemums on the graves. Here are some … 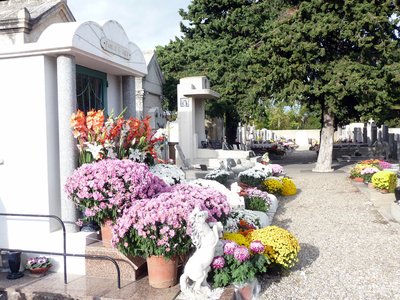 So we realised we had committed a major cultural faux pas and had presented Arlette with the equivalent of a funeral wreath, but she was too damn polite to tell us. However, it is now Tuesday and we haven’t had a knock on the door for the past three nights. … alas, the chestnut lady cometh no more.

Posted by Hawkson 07:42 Archived in France