In an Egyptian Market

Cairo, once a stunning city of beautiful buildings and elegant people, is now as disheveled and dowdy as an elderly widow who’s got into the gin and let herself go. The city still has some good bones but it desperately needs a facelift and a boob job to perk it up. Even the much vaunted Egyptian Museum which opened in 1902 is cracking under the burden of age and the weight of its exhibits. It is bulging at the seams with tons of five-thousand-year-old statuary and funerary. The place is crammed with mummies and all of their burial accoutrements; jewellery, weaponry, and even full-sized chariots and boats for use in the afterlife, and, amazingly, much of it is in near-pristine condition: richly decorated coffins could have been painted last week, and the joinery of wooden chests and chairs is as sound as it was three thousand years BC. The highlight of our visit was the gilded death mask, sarcophagi and funerary objects of King Tutankhamun. But these are a mere 3,300 years old; ‘brand new’ compared to most of the museum’s artifacts.
Cameras are confiscated at the door so we can only show you the exterior … 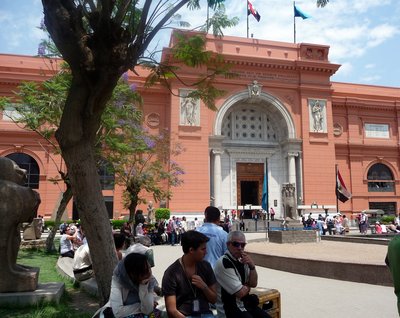 Scenes from the souq... 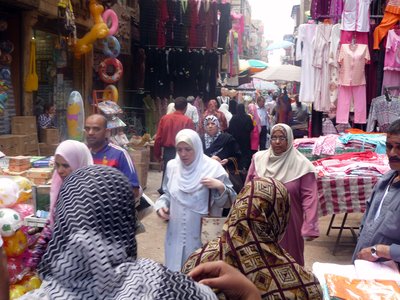 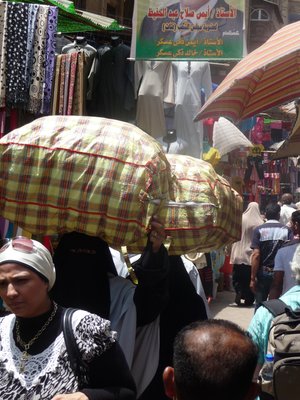 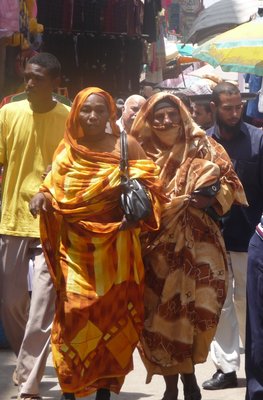 Today we visited the labyrinthine Khan al Khalili souq (market). It’s May Day - a public holiday – and we were joined by about 20 million locals. The souq lies in the heart of Cairo’s Islamic district and is a vibrant, bustling warren of narrow lanes crammed with pushy purveyors of everything under the sun – and everything is ‘special price’ just for us because their second-brother’s first-wife’s third-cousin lives in Toronto... Honestly! 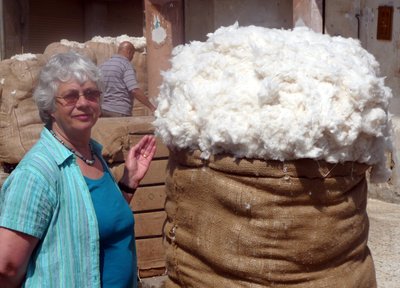 Egyptian cotton was front and centre, along with plenty of touristy knickknacks, but this is a serious marketplace where the Egyptians bargain for all manner of everyday goods. However, despite the constant assurances that everything on display was being personally knocked out by a handful of skilled craftsmen in a dusty workshop just a few steps away, we saw far too many boxes like these, stamped, “Made in China.” 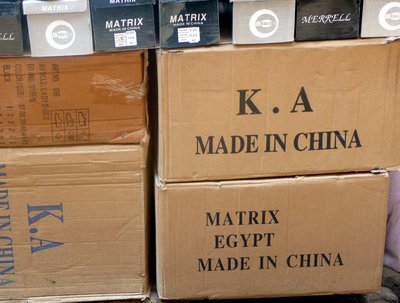 But this isn’t the first time in history that Egypt has been besieged by foreign marauders: descendants of The Pharaohs lost to the Greeks, the Romans, the Ottoman Turks and even the French and British – and each of these invaders stamped their own mark on this part of Africa.
We saw many colonial European style houses when we took a short cruise on the Nile but, in contrast, we visited monuments and streets which have remained unchanged for millennia. 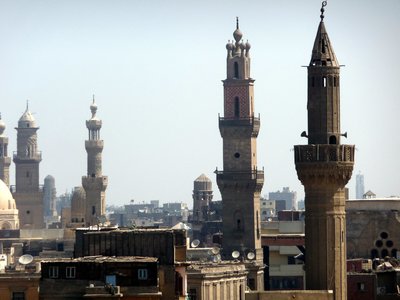 Cairo may not be ideal for the novice independent traveler – few people outside the tourist trade speak English, and written Arabic is just a squiggly worm – but we’ve had no trouble. Much to the chagrin of our hotel’s taxi drivers we quickly mastered the Metro and whenever possible avoided the roads. The traffic is a nightmare – no one stops at pedestrian lights and they only give way at red signals if a policeman is there. But, compared to Hanoi or Bangkok, it’s a cakewalk. The cars here usually stay on the roads, not the footpaths; there are few motorbikes; and friendly locals will help you to cross the speeding traffic. Here's the baker's boy showing us the way. 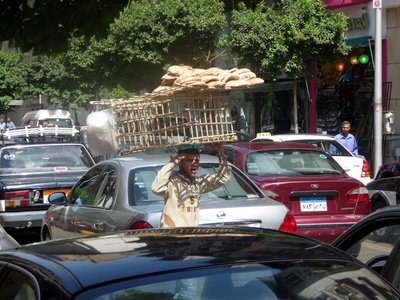 The Caireans have, in general, been very friendly and helpful – especially the ones who have been angling for business – and our first visit has been a great experience. Now we are off to Abu Simbel to visit the temple of Ramses II.
Here are a few cultural mores we have learned by experience:
Egypt sprung its clocks forward an hour last Thursday night – but no one told the Canadians, (who nearly missed their breakfast on Friday).
The hotel concierge gets pissed off if you hail your own cab.
Certain carriages on the Metro are reserved for women only.
Not all restaurants bedecked in flowers and lights are celebrating their opening night – some are preparing for a wedding reception and don’t want a couple of Canadians gate-crashing the event.
Whatever your destination, all taxi drivers stop at the ‘most best’ and ‘most famous’ ‘Papyrus Museum’, ‘Papyrus Centre’ or ‘Papyrus Institute’ en-route. These are all euphemisms for high priced papyrus shops where they claim that, unlike all the others, their pictures are genuinely hand-painted by famous artists, and they will give you a very special price because their second-brother’s first-wife’s … You know the score. 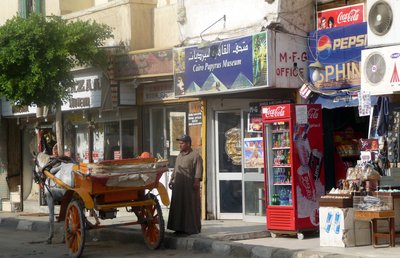 Posted by Hawkson 12:28 Archived in Egypt

I'm amazed at all you see in one day!

I wAS IN MORROCO 40 YEars ago and he exact words were used to try to sell us stuff including student price because of course that long ago we looked like students.... Thanks for the slice of Cairo although I don't know if it sounds terribly appealing.....

Love the photos and commentary and seeing you two in your element. You are indeed travellers; wanderers; adventurers but not tourists.

Ottawa has one million tulips in bloom, and beyond the fact of who does the counting, it is a palette of splendid colour.Summer has arrived and fortunately I am not in Calgary where they are expecting high winds and a snow storm.

Here we are expecting Rowan to arrive any time now. Meghan is especially hoping it will be soon.
Bye for now, Trudy

Oh my this is the coolest trip ever and I want to travel in your suitcase (whoops I do know the size of your suitcases so that won't work). You just better write a travel guide so I can follow in your footsteps one day!! Love, love, love the photos! Safe travels!