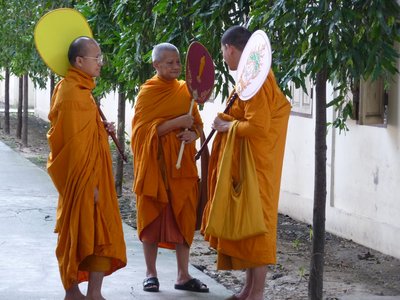 Signs in Bangkok warned us against giving alms to fake monks, so we have been trying to work out which are the real McCoy.
Many working peasants, living in mosquito infested hovels knee-deep in stagnant swamps, make generous offerings of money and food to the monks of the numerous magnificent Buddhist temples, (Wats). On trains, passengers buy food and water for travelling monks from the dozens of itinerant vendors. Buddha is everywhere here - always with his hand out. There is a Buddha around every corner; enormous Buddhas look down from the hill tops; armies of baby Buddhas surround Wats; pictures of Buddha hang on every wall. If we had started counting Buddha images from the time we arrived by now we may have discovered the world's largest known number.
But, back to the monks: Saffron robed monks are in the same category as the elderly and disabled and have to be given a seat on a bus or train, (trains have separate compartments for them). But monks are not allowed to sit next to a woman, (God forbid such a thing). On the bus from Phitsanoluk to Sukhothai Sheila and another woman sat either side of the only vacant seat. Then a monk got on and chaos ensued. The bus conductress began moving people around the bus so that the only spare seat would be flanked by two men - easier said than done on a crowded bus. After several minutes of musical chairs the correct gender balance was achieved, then a spoilsport further down the bus stood up and gave his seat to the monk. The conductress was clearly miffed that all her organizational skills had been usurped by one thoughtless passenger.

So - Back to the question. How do you tell a fake monk from a real one?
You ask him of course!