Congratulations to Christine for identifying the Winter Palace Hotel in Luxor.
Here is the grand old dame of the Nile – although, like most of Egypt, she’s looking a little dowdy in places. 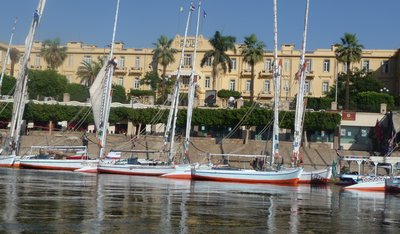 Here’s the lounge where Agatha Christie once sat to write… 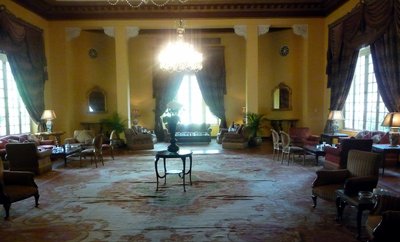 We have left Luxor now – escaped is probably a more apt expression; escaped from the mobs of taxi and caleche drivers waiting to pounce the moment we left the hotel; escaped from the mayhem of tour guides and storekeeper’s touts trying to drag us to places we didn’t want to go; escaped from the excruciating discordant wails of a dozen muezzins calling their flocks to prayer from 4.45 am to 11pm everyday. Our room was well padded, but nothing keeps out the fervent incantations of a determined Minaret-jockey pumping out more watts than a Mick Jagger concert through honking great speakers.
But even a padded prison is still a prison, and we found ourselves using devious routes to slip past the touts guarding the entrances.
However, as the week progressed matters took an ugly turn. Caleche drivers, felucca captains and shopkeepers would accost us fiercely. “I see you everyday. Why you no take ride? Why you no buy my …” whatever. We would like to have replied, “Because everyone so far has lied to us and tried to rip us off,” but we didn’t. And when we did buy gifts we nearly caused a riot as shopkeepers angrily accused each other of stealing potential customers.
We finally broke down and took a felucca ride in the sunset … 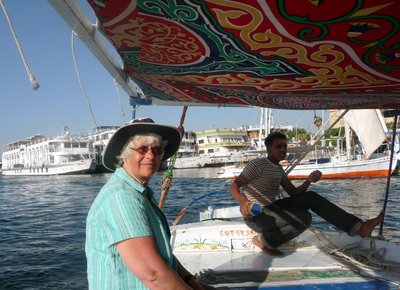 We paid a fair price and were happy, but when we disembarked a furious young captain bitterly complained that we should have gone on his boat and not his cousins.
And then we were guilted into taking a carriage ride with these two con-men. 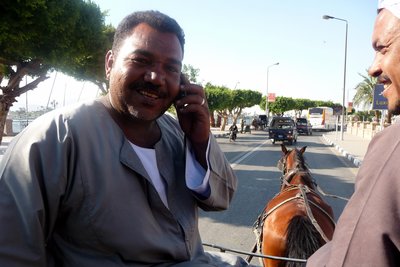 We should have realized they were rogues – they both smiled sweetly and were so kind … until the end of the trip when they demanded ten times the agreed price. Jim’s policeman’s voice and no-nonsense tone took them by surprise and they got only what was due, but it is easy to see that many tourists would pay up. Our best advice to visitors to Luxor is: DO NOT TAKE A CALECHE RIDE UNDER ANY CIRCUMSTANCES.
At the hotel pool we met a French couple on their seventh visit. “How do you put up with all the hassle?” we asked. “Oh. We never go outside,” they replied, as if suggesting that only lunatics would venture into the fray beyond the hotel’s beautifully manicured grounds. We must be crazy because, even at 6 am as we scuttled to a coffee shop in the cool morning air, touts of all type shook themselves awake and come running to offer their services.
However, in fairness, they’re not all rogues and Jim was pleased to discover one apparently very honest old shopkeeper who sold him litre bottles of water for just $1.00 while most places charged $3.00. On our last day Jim discovered the true price was actually 40 cents.

Posted by Hawkson 11:37 Archived in Egypt

It sounds harrowing being a tourist there but for the people who live and try to do business it sounds like heart attack city.

Well!! It would appear I had a rather boring day - coffee (on Penelope's expresso machine chez Swanson- shopping for geraniums.... planting my deck plants, lamb chops, roasted potatoes, asparagus and salad and strawberry rhubarb crisp - no hassles......

correction - coffee was at upper berry point road....on a sunny Sunday in May - temperature about 16 and only the sound of those noisy California boys barking......