Jim started his working career as a chef aboard a cruise liner so it’s no surprise that he has taken over the galley aboard Carmen and is working a little culinary magic for the delectation of the captain and crew.
Last night’s dinner began with a salad of local greens tossed in balsamic vinaigrette, loaded with herbes de Provence, and topped with Pyrenean goat cheese and avocado. 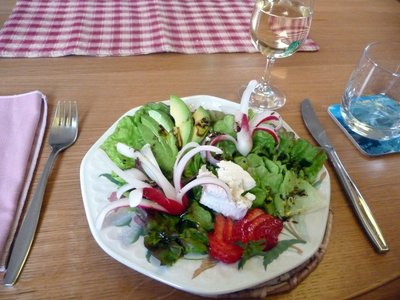 For the main course we had saumon aux amandes, (sautéed salmon fillets with almond slices tossed in nut-brown butter), together with a macedoine of fresh vegetables and Jim’s special hollandaise sauce. 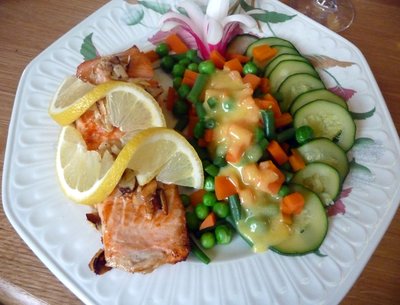 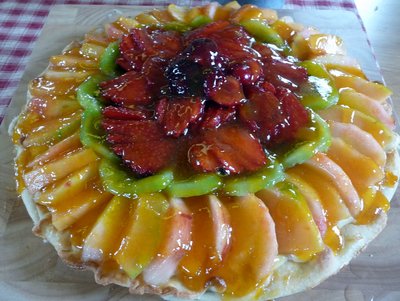 For this evening, we have perhaps the quintessential Mediterranean food – fresh sardines. 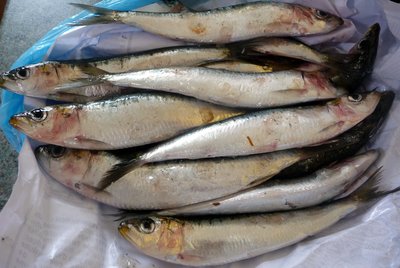 We would like to say that we are going to cut down on our eating – but why lie. We are surrounded by markets and stores selling the most wonderful foods. So we will do what everyone else does on a cruise… and hang the consequences.
And now a little bit of local colour for non-foodies.

Carcassonne castle is a magnificent sight as it towers over the new city, (“New” being a purely relative term – it was built in the 14th century). The castle itself was originally Roman and was gradually added to until the mid 13th century. Its massive walls encompass an entire city, with houses, shops, hotels and even a cathedral, and had a population of many thousand in medieval times. 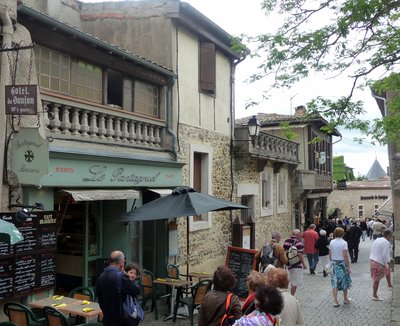 Today the city within the walls is a tourist mecca catering to visitors of all types. There are plenty of sandwicheries offering lunch for a few dollars, but at the other end is La Barbicane where set dinners run up to $200 a head. Here’s the cheapie menu – about $100. 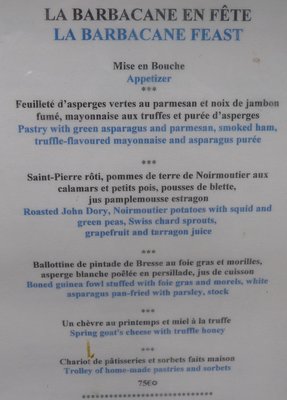 Posted by Hawkson 04:52 Archived in France

would that be low fat hollandaise?

I'm about to eat my laptop!

Great shot of carcassonne. You rarely see anything inside the walls. My dad had a fascination with the castle and made his sones a scale model of it one Christmas. I am sure he never got there, but he left me with an equal fascination for it. I will one day get there, perhaps even with $200 in my pocket for a meal just for the joy of it.