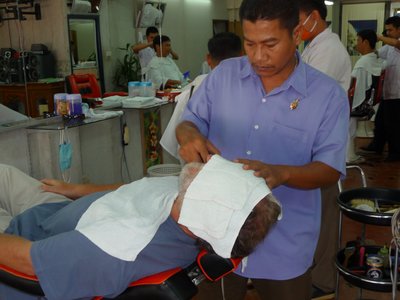 After 3 weeks, Jim's beard took a hint from the lush tropical surroundings and madly sprouted. Thai children started calling him, "Meester Chreestmas." So a little trim was called for. The barber in Sukhothai seemed to have no equivalent of "little" and after 5 minutes of discussion and preparation Jim was swaddled in several towels, (for the blood perhaps!). and a blindfold. He looked, and felt, like an accident victim awaiting a tracheotomy.
Twenty five minutes later each individual hair had been razored and scissored to within an inch of its life.
"Great!" exclaimed Jim.
"Not so fast," (or the Thai equivalent), and he was physically forced back into the chair.
Now what? Nose hairs and ear hairs - all part of the deal.
"This is going to cost," muttered Jim as the clock ticked past 30 minutes.
"O.K. Enough," he tried again. But anyone who has tangled with a Thai barber knows that they are closet Thai Boxers. Jim was wrestled back to the chair for a full upper-torso Thai massage; hands, arms, shoulders, neck, head and face.
"I only wanted a quick trim," bleated Jim. Too late - he got the works.
And the total cost - tax included - exactly $1 Canadian. (Fifty pence!)

Trimmed to within an inch of his life! Literally.. Great to hear from you. Harv and I were just at the KIDS foundation fundraiser (started by Adrienne Dartnell and Rick). They are working in Cambodia and Burma, as well as Thailand and India. Very moving. Do you know them?
luv yas
Sharron & Harv

I'm enjoying reading this and thanks for your Bangkok postcard

Am wondering if you are with the thousands marching in Bangkok?