Lucknow - Past and Present

From what we've seen on our travels so far. ancient history seems to be a thing of the past here in India. For instance, this magnificent tomb of Mohammed Ali Shak in Lucknow, (the Bara Imambara), looks as though it should have been built in the 12th or 13th centuries, yet it is less than two centuries old. 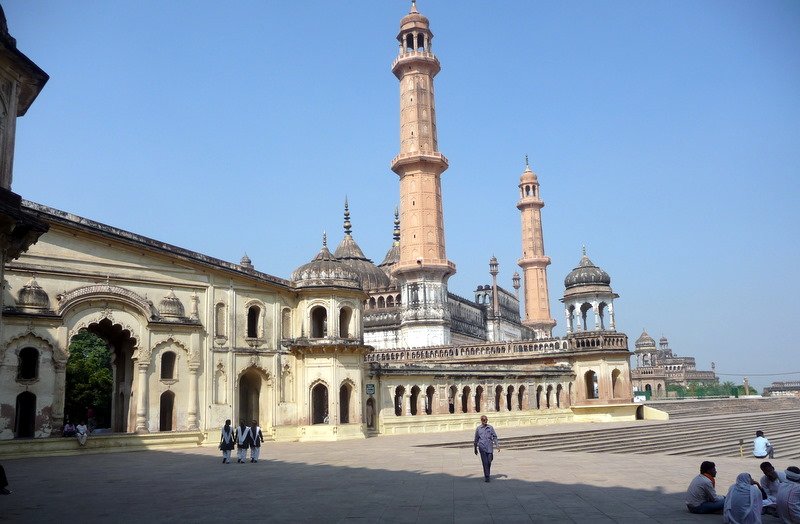 Although these building look impressive from a distance, up close they are a sorry sight. Here's one old guy with a trowel trying to patch up the plasterwork - he has a very long way to go. 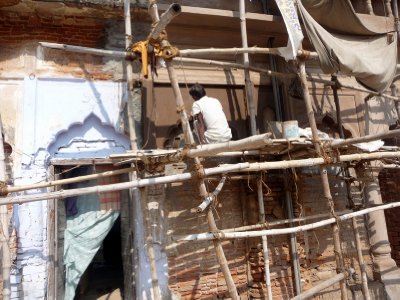 Work on the complex was abandoned in 1840 before it was completed because Shak died. And nothing has changed here since; nothing is properly finished; everything is in a state of collapse... (Including a relatively new 5 storey building in Delhi the other day). 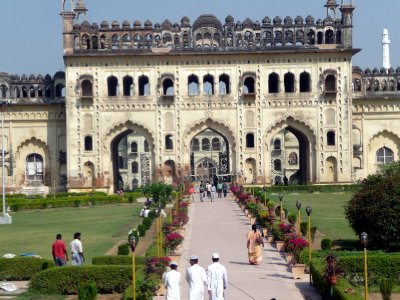 However, in the early eighteen-hundreds a magnificent city within a city was built here in Lucknow. It was the British Residency and was the seat of power for the Raj in this part of India. Some 3,000 British and their army of Sepoys lived in palatial buildings surrounded by manicured gardens until 1857 when some Sepoys mutineered and attempted to overthrow the British in the First War of Independence. Here are the remains of some of the buildings... 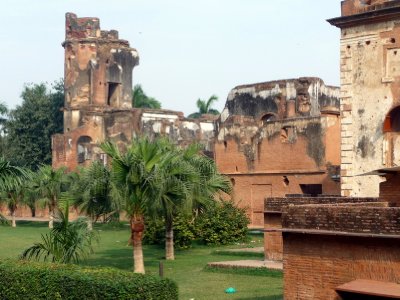 During the 3 month seige of Lucknow by more than 30,000 Indians, some 2,000 of the residents were killed and most of the buildings were razed. However, reinforcements eventually arrived and fought off the insurgents. The buildings were never repaired and provide a poignant memorial to India's violent past. However, we were surprised at the large number of teenagers who were visiting this site until we discovered that it's ruins and rambling grounds provide numerous hidey-holes for young lovers. Arranged marriages are the norm here and there are very few private places in this teeming city away from the prying eyes of parents and chaperons where unapproved assignations can take place. Here's a couple spooning under a banyan tree in the Residency's lush surroundings. 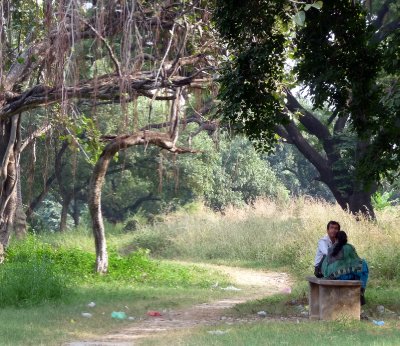 We are now on our way to Varanasi, (formerly known as Benares), the famous religious centre on the River Ganges which loftily claims to be the oldest continuously inhabited city in the world.We read that there are no buildings older than 200 years in the entire place, but we are optimistic that we might discover India’s answer to Stonehenge or the Great Pyramid of Cheops there.

Posted by Hawkson 21:04 Archived in India

This adventure is more than a world away. More like a planet away.Even your dreams must be colourful, to say the least.
Not that you need to know but I need to say that Calgary is minus 22 this evening in contrast to your plus 29.

Thanks for keeping us up to date. Each posting is a pleasure to read.
Love,
Trudy

And they are predicting snow on Gabriola for this weekend! May that sun continue to shine in the sky above you.
That scaffolding is scary. It looks as though the whole thing is going to collapse to the left.

.....and snow is forcast here in England too. Thoughts of India are keeping me warm. Made the Xmas cake with Gran.
Love to you both
Amanda
XXXXXXXX