The River Ganges is a probably the world’s largest open sewer. It carries downstream the untreated excrement and detritus of many millions of people and animals. And, in the end, it even takes their bodies. The rich are cremated and their ashes scattered on the waters, while funeral pyres on the riverbank consume the ultra-devout and the poor. 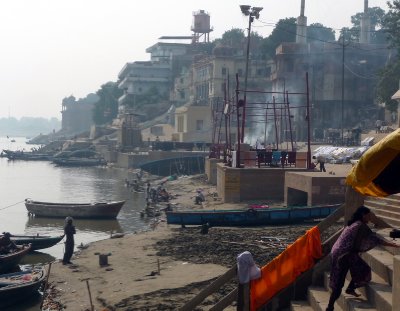 Our guidebook warns that the water is so toxic that it cannot sustain life, and that the faecal coliform count is more than 3,000 times the maximum permitted under WHO rules. So why on earth would anyone risk almost certain gastric meltdown and possible death by drinking and bathing in this poisonous brew? 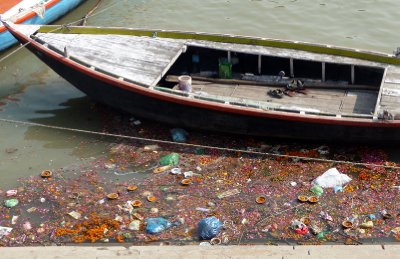 The answer lies in the Hindu beliefs that the water of the Ganges is so holy it will wash away a lifetime of sins, and that to die in Varanasi guarantees freedom from the cycle of life and death, (moksha), that binds us poor mortals to eternal misery.
We’ve seen the river and are willing to take our chance on eternal misery! But Varanasi is fascinating because millions of pilgrims come from all over India and the rest of the world in the certain belief that submersion in this sewer will purify them. Some people need a reality check here! 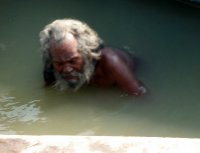 The winding narrow lanes leading to the ghats, (the stone steps at the water’s edge), are reminiscent of London in the middle-ages... 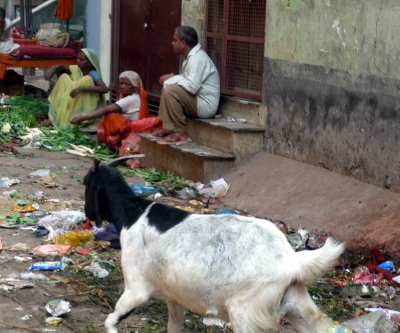 Goats, cows, scrawny dogs and untouchables scramble for scraps of food in the garbage strewn alleys, animals and humans turn dark corners into smelly toilets; beggars plead for alms; merchants of every kind hawk dust-covered wares from dingy shops; and the traffic chaos is indescribable. It took an hour and a half to travel 5 kilometres from our hotel to see the choreographed Hindu ritual that takes place each evening on the ghats.

Viewed from our boat, away from the shoreside squalor, the ceremony was a symphony of light and sound. (although it appeared to be more of an orchestrated crowd-puller than a true Hindu ceremony).
But Hindus aren’t alone here. Our journey to the evening show was hampered by great herds of goats that were being driven through the narrow streets in advance of today’s mass slaughter to celebrate the Muslim festival of Eid. 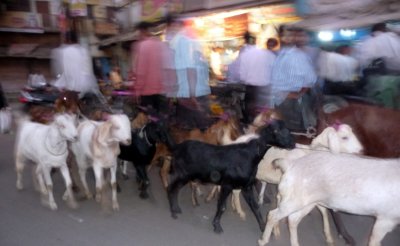 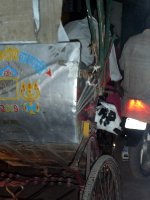 Next week 3 million Hindu pilgrims are expected to arrive in Varanasi to celebrate the second Diwali, known as Dev Deepawali,(who knew?), and we are told that the city will be chaotic. Fortunately, we will be two thousand kilometers away in Hyderabad. But these devotees will still be here on the ghats - still hoping to die...soon! 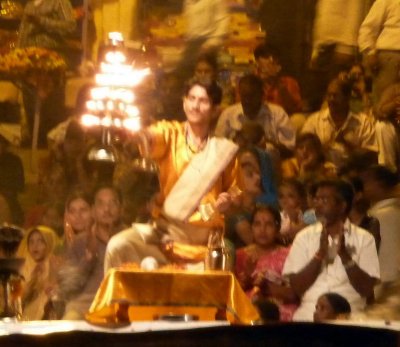 P.S. Here are a few absolutely true snippits from today’s edition of The Times of India.
'Muslims have agreed not to slaughter cows for Eid this year to avoid offending Hindus.’
‘A blind Muslim woman has trained a seeing-eye horse because it would be unclean to have a dog in her house.’
'A sacrificial goat whose coat had a pattern that looked like the Arabic spelling of Mohammed was sold for $2,000.’
And, finally, ‘The Indian Government has announced that the River Ganges will be perfectly clean and pure within ten years.’ (And now, from our own correspondent in India, "Pigs have been spotted flying all over the place.")

Posted by Hawkson 17:47 Archived in India

Hi JIm & Sheila! We're enjoying your posts immensely! What a fascinating place and we love the commentary! Deb & Mike

Wonderfully descriptive commentaries but you ain't going to convince me to go to India!!