Following our dismal failure to discover Calcutta’s attractions it occurred to us that the whole of India might be slipping further into the gutter. But then - Wow! What a shock when we touched down at Hyderabad’s glisteningly clean new airport and found ourselves catapaulted into the 21st. Century. This place is a wealthy hypochondriac techie’s dream; half the buildings are hospitals, the other half are digital emporiums, while most of the others are pearl purveyors. Add the fact that Hyderabad has the biggest film studio in the world, and a world class Hi Tech city, and it’s easy to see the future here. But this is no Vancouver or Silicon Valley; the roads are still clogged with smoke-spewing tuk-tuks, (called auto-rickshaws here), and ancient buses; many of the pavements are just pot-holed parking lots for motorbikes, and the city has a liberal sprinkling of litter. Here’s a view of the city's chaotic roads from the top of the 16th century Charminar tower… 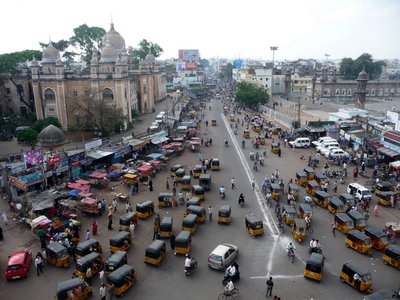 See the tiny yellow and black tuk-tuks that buzz about the city like thousands of demented smelly wasps? They are only licensed to carry four adults or six children, not the ten or so they often cram in, and the police have been cracking down. So a tuk-tuk strike is on the horizon – that’s bound to clear the air. However, for a breath of fresh air we took a trip to the massive 12th. Century Golconda Fort on the city’s western edge. 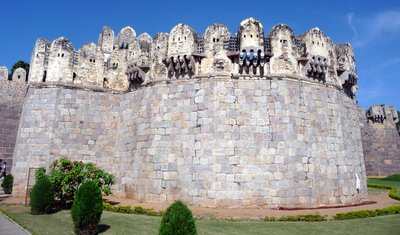 This huge fortress was built in 1143 and eventually became one of the Moghuls' strongholds.

Today, Hyderabad is the world’s centre for pearl stringing, and it is also home to hundreds of English language call-centres, (which is why you can never understand the guy from the bank when he calls). However, if you feel like having a heart transplant or a hip-replacement, Hyderabad is the place for you. With more gleaming hospitals and medical centres catering to transplant tourists than you can shake a crutch at, this place is hopping along nicely. Just don’t try climbing the Galconda fort to get this spectacular view of the city until after the operation.

Posted by Hawkson 18:17 Archived in India

James and Sheila, you both are amazing . A duo to be reckoned with . The Amazing Race with yourselves as the only participants. You are continuing to educate us and hold us in awe. Keep up the good work. Your Blog Fans , Cynthia and Bill

Just caught up on your entries and I was about to say "Who in their right mind would want to go to India"?? Then the entry before talked about the wonderful people and I see why it is enchanting after all. I love the photo of the woman and Ronald on the bench! Keep 'em coming and stay safe, friends. Love Joyce