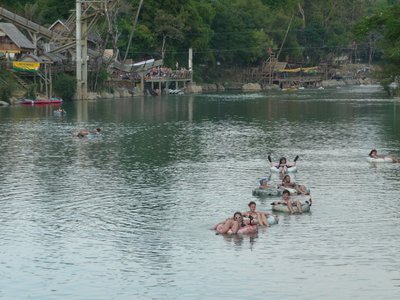 Riverside watering holes take on an entirely new meaning in this famous Lao town - the self-described "Tubing Capital of the World."
Bus loads of exuberant young backpackers all said, "You've gotta go tubing on the Nam Song - everyone does."
We snaked for 7 hours on a bus through spectacularly tortuous mountains, anticipating an adrenalin driven ride down rapids, whirlpools and watershoots in inflated truck inner tubes. We'd heard of zip-lines, bungee jumps and water slides, together with tales of of broken limbs, bruised bodies, smashed cameras, and all manner of foolhardy falangs' goodies being dredged from the river by the locals.
Would we risk it all?
Would we hire inner tubes and join the madness?
Would we shed four decades and take on the mighty river?
Not flipping likely!
But wait - where are the bone smashing rapids and the foaming surf? Where is this Niagara of S.E.Asia?
Certainly not here, but the entrepreneurial owners of the numerous riverside bars have found a niche market - thousands of beer hungry backpackers drifting gently down this softly flowing tepid river, who go home with intoxicated tales of bravado as big as their hangovers.

This week's question - where are we?
The prize - an inner tube and a bucket of Lao whisky on this idyllic riverside. (airfare not included).

I think that you and Jim should have taken on the might river! It would have been fun. Where are you? You are in a town called Vang Vieng!!