We're no longer in Iceland, but we were on Friday morning when we stopped to refuel. From the plane we had vistas of a frigid treeless landscape under a slate sky and decided to take Iceland off our bucket list. But then we arrived in Istanbul and got an equally chilly welcome. The sun was shining, it was 27 degrees, the Bosphorus was blue, but our hotel gave us the cold shoulder. It transpired that we had been scammed by a fake website promising nirvana for just $130 a night, (breakfast included), and all we got was a phony confirmation slip and the prospect of 5 nights in a backpacker's hovel. But the hotel's manager and staff were terrific and, despite the fact that they were already overbooked, they found us a lovely room overlooking a cobbled pedestrian street shaded by laden grapevines and lined with restaurants...nirvana!
Here's our view as we try our first Donor kebab - Great! 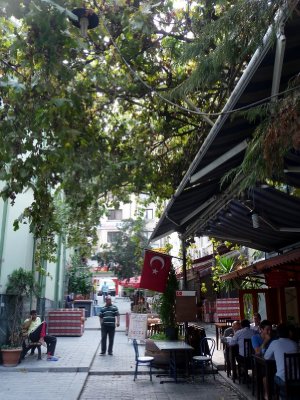 Istanbul is just bursting with tourists, especially northern Europeans trying to wring the last few rays out of summer while avoiding the turmoil in North Africa and the chaos in neighbouring Greece, but the locals seem genuinely pleased to see us. As we strolled along the Bosphorus this morning the fishermen and the swimmers all waved and smiled - we felt quite at home... 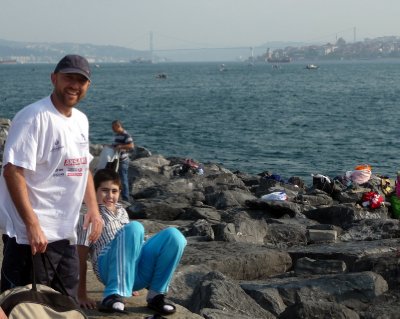 We are staying in the old city of Istanbul, (Constantinople), and will be visiting the ancient monuments of the Topkapi Palace, the Aya Sofya and the Blue Mosque over the next few days. But this is a very modern city - no camel carts or donkeys here - and as we drove in from the airport all we saw was a landscape entirely shrouded in modern apartment buildings housing the 13 million people who call Istanbul home. We may be on the very cusp of Asia but this part of Turkey has both feet firmly planted in the West. Now here's a couple of panoramas to whet your appetite - and ours... 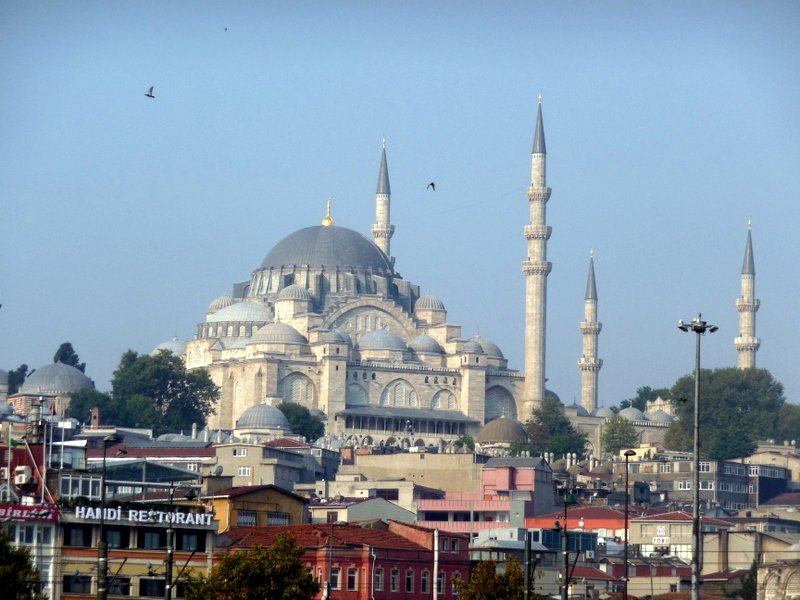 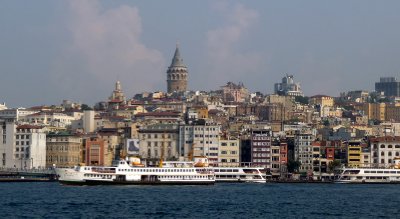 Posted by Hawkson 05:44 Archived in Iceland

So great to hear from you already. Sitting in my favourite Sunday morning coffee shop and checked my mail. Voila! There you are in Turkey. I am intrigued already. Thank you. Trudy

May your luck with accommodation continue. I'd have had a fit when I found out about the scam.
Gorgeous blue sky I see again in the photos. Ugly black ones rolling in along Georgia Strait this am and rain predicted. Envious of your dry 27 degrees.

So nice to go travelling with you again. Sorry to learn about the hotel scam.

So nice to hear about your travels again. I'll have to send you some beautiful pictures and videos of Iceland though, so you can put it back on your bucket list! It's on mine, being that is my heritage, but also because of all of the stories of the warm and interesting people, and the breathtaking pictures of beauty I've seen from others who have travelled there. Perhaps the airport doesn't give the best vantage point. :-) Happy travels! Deb

Thank you for sharing your travels with us. What a treat to see another part of the world through your writings and photographs. Keep them coming.

So happy to be on the road again.....travelling through your sights and sounds. You make every moment feel like my own. Thank you and safe travels!
Luv Max

Delighted to know you're on the move again -probably means we'll see you in London before too long. Iceland gave us a similar welcome in 1964 nevertheless we had a great day eventually. Was the island of Surtsey brought to your notice as you flew on to Turkey? The volcano which resulted in it was still active and visible as we sailed by (at a distance) Istambul was on cruise itineries twice so have visited all the places you mention.
Keep on blogging so I can refresh my memory. Eileen

It's remarkable how similar we all are around the world. The fisherman in new westminster are standing in the intersection of 6th and 6th waving at the tourists too! Remarkable photos as usual. The Blog is such a great distraction for few those of us who still have employers with work owed them!

Nice surprise to see the 'Travellerspoint' message in the inbox. Looking forward to sharing in your adventures from a part of the world that has always beckoned.