The People of the Democratic Republic of Laos v. The Ho Chi Minh City Orchestra of Vietnam 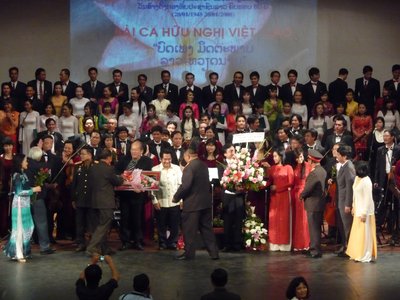 At first glance it may seem supercilious to equate a performance of classical music, song and ballet with a soccer game but, right from the kick-off of our evening at the Laos National Theatre, we realised that we were involved in a grudge match.
An hour of speeches in Vietnamese, (painstakingly translated into Lao), might have been slightly boring if the audience hadn't drowned them out with a constant barrage of chatter and joyful greetings to family, friends and the neighbourhood tuk-tuk drivers. The audience easily took the first goal.
Then the choir began ... and so too the audience. Hundreds of yakking teenagers, some on cellphones, simply turned up the volume.
Audience 2 Performers 0
Screeching babies and yelling toddlers upped the score to 3 - 0 by the end of the first set.
The ballet dancers' pirouettes were easily outmatched by the constantly shifting audience - bopping back and forth along the rows and waltzing up and down the aisles.
Audience 4 Performers 0
A second choir had hardly begun when a raucus troupe of giggly teenagers miss-timed their approach and rushed the stage to present roses in the midst of a song. They were clearly off-side and a penalty should have been awarded, but the referee's call was swamped out by the catcalls and laughter from the rose-bearers' supporters.
5 -0 (and nowhere near half-time).
And so it continued:
The tenor soloist was tripped up by a dozen rose-carrying youths just as he was about to take a run at a difficult crescendo; the orchestra didn't have the power to overcome a barrage of cellphones, fifty IPods, and a radio in the back row; and the conductor had to drop his baton to accept an enormous bouquet in the middle of an overture.
We moved to avoid the chatty schoolgirls; again to escape the crying babies; once more because of a noisy spitter; and finally to escape the 4 year-old who discovered that spring-loaded theatre seats could be repeatedly banged up and down in opposition to the other team's percussionist. We ended up next to the toilets from where we could watch the drunks staggering back and forth.
Score ....PDR Audience 27 HCM Performers 0
And then, just as the orchestra and choir combined in a rousing finale, ninety percent of the audience rushed the exits to beat the final whistle.
This lot would do well at Arsenal or Manchester United!
What did we do? We went back the next night for the return match of course.
The screaming teens had been replaced by hundreds of uniformed military types, who had obviously been threatened with unspeakable punishments for any insurrection, and we were rewarded with a delightful performance of music, song and dance extolling the virtues of hard work, military service, and Communism.
It was ..................................... Interesting! (and free).

You went back!!! I would never have done that even with the promise of armed guards. The chaos at Art Works is as much as I can stand. You two are really travellers tres extraordinaires.