It's a dog's life on the roads here! 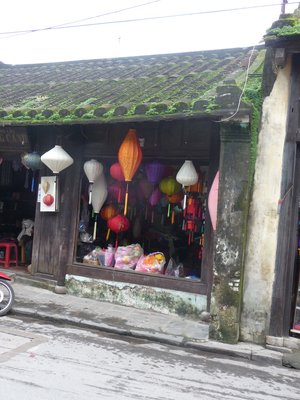 Hoi-An is geographically halfway between Hanoi and Ho Chi Minh City, but it is a world away from both of these crazy, chaotic cities. We have only been here half a day and have already been ensnared by the ancient labyrinth of tiny shophouses and fine restaurants. But tourism is at least 50% down and the top end of the market has been devastated. Enormous luxury hotels that line the bay lie empty and, on our way here from Hue, we passed numerous partly built resorts that are destined to become white elephants.
In the next few days we will explore the temples and pagodas of this Vietnamese gem. In the meantime, some general observations on traffic.
A single crash helmet will protect up to 4 people on a motorbike as long as the wearer is the man. No more than 6 people and a dog are allowed on a moped.
"Keep Left" and "Keep Right" signs are merely political slogans.
Sidewalk parking places for motorbikes are provided everywhere, and the numerous ramps that we assumed were thoughtfully provided for handicapped access are actually for the bikers. Pedestrians and wheelchair riders are relegated to the gutter, (where they apparently belong).
All vehicles are equipped with the very latest in collision avoidance technology - it's called F.L.H. (A f.....g loud horn).
Size matters here. Amid the vehicular anarchy there is a heirachy, At the top of the pecking order are the buses and trucks that forge through intersections and overtake without regard for their lesser cousins, the cars. Motorbikes, scooters and mopeds come next - sometimes laden with passengers carrying double beds and three-seat settees - no joke. The motorized menaces weave and dodge without regard to life or limb and make crossing any road a game of chicken. Cyclists - no more than four per bike - swarm every available paved inch, leaving the lowly pedestrian, forced off the footpath by the parked vehicles and the sidewalk vendors, in constant danger of being clipped.
Only the dogs fair worse than people here. If they get knocked over they are likely to be served for supper. The stomach churners continue. Here, "The Dead Dog Cafe'" isn't a CBC radio show - it's a reality, as are the restaurants offering bear, ostrich and sea snakes. Cocker Spaniel stew anyone?

Posted by Hawkson 05:56 Archived in Vietnam

Yikes! Its a different world. We are settling in for another night of snow..
luv ya's
Sharron & Harv

Hey you two. It's been a while since I last checked in. Imagine my envy as I sit here worrying about the waterline from the cistern freezing and debating whether to head over to the Island with work finished Friday (Joyce and Graham checked it out - still flows).Tourism down 50%? Here too. Sumiko's mom arrives on a less than half-full flight from Tokyo. Packed with skiers in years past.
Loved the tale of the helmet as good luck charm.
Talking about dog for dinner,how is the food outside the dead exotics?