After a week on Langkawi Island Jim decided that the local tourist brochure needed a reprint.
Here is his suggestion: 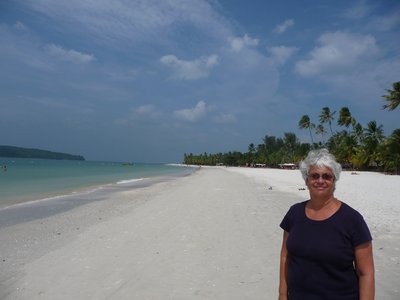 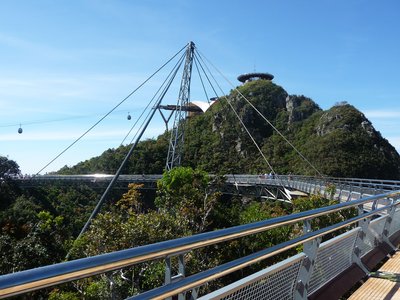 Float above the tropical jungle on one of the world's steepest and highest cable cars. 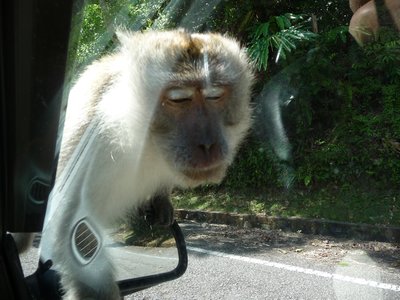 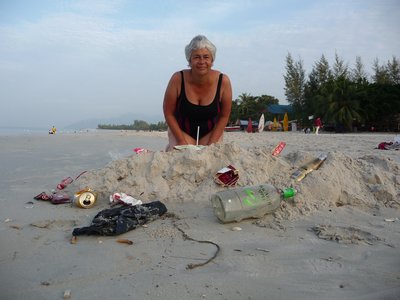 Pick your way across litter strewn beaches to swim in ...... Whoa! Wait up a minute. You can't say that. You can't mention all the litter on the beaches. What about our man Fred?

We've seen Fred. (Not his real name. We changed his name to protect his identity). We saw him every morning at 7.30.am. as we headed across the wide sand beach towards the turquoise sea and threaded our way past yesterday's detritus of beer bottles, cans, bags and plastic of all kinds. Fred would be there with his trusty tractor towing a giant, shiny machine full of cogs, conveyor belts, sieves and rakes. It is called a beach-cleaner. And if Fred pulls the right lever he can lower this giant machine onto the beach where it will scoop up the sand and shake it and sift it until all the garbage is heaped into its giant hopper and all the lovely clean sand is back on the beach.
But, every morning after our swim, and after Fred had driven his giant,shiny machine up and down the beach a few times, we would thread our way back through all of yesterday's garbage - all the bottles cans, bags and plastic - still on the beach .... just re-arranged a little.
Why? Because Fred, (not his real name), discovered he can drive his tractor much faster along the beach if he doesn't use the giant, shiny machine. And, if he doesn't use the machine he doesn't have to drive all the way to the dump will all the garbage he collects, so he can go home for breakfast with his wife, Jane. (Not her real name either).

So - what to do? Finally, on Friday, Inspector Bliss could stand it no longer. So he put on his policeman's voice and had a few friendly words with Fred.
Fred was "Velly, velly solly" and he quickly lowered his giant, shiny machine to the beach and began picking up the litter.
"Thank You," said Inspector Bliss. But as Inspector Bliss and his lovely wife strode off across the beach, Fred quickly picked up his machine and raced off.
We were hoping to take a photo of Fred but he didn't come back with his tractor again. What a shame.
But then we looked through our album and realized we did have a good likeness of Fred. He's the one peering through our car's windshield in the third picture above.

Posted by Hawkson 18:35 Archived in Malaysia

Ah, good to see Inspector Bliss is still on the job. Sheila, you look fab - the haircut was the right thing to do, wasn't it? Will you become an eco-greenie when you return?

Ouch! Hurst to see all that garbage on the beautiful beach. Good on ya, Inspector.
Will the lesson stick, do you think?
luv
Sharron

But beware of any "abandoned" beach mats. You never know.

I see a potential career change opportunity for Tony and I. Picking up garbage along a beautiful beach with the sun shining and the sound of waves?

What an artist that Fred is - rearranging the stuff on the beach. Lack of performance art at its best.
But such a stunning gallery that beach!