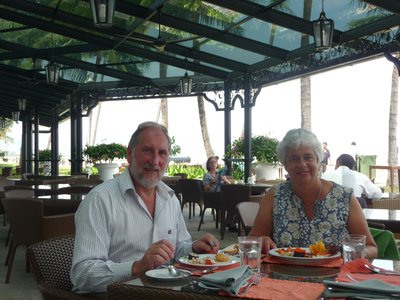 Here we are celebrating the halfway point in our adventure by being terribly British and taking "Tiffin" in the renowned Eastern and Oriental Hotel, Georgetown, Malaysia. Ex-pats have been fed and watered in this bastion of colonialism since the days when the sun shone continuously on the Empire in 1885.
Tiffin, (lunch), today consisted of a fabulous assortment of local seafood with exotic sauces and salads. Grilled lamb, duck and chicken to follow, together with such British rareties as braised oxtails and fish pie. The deserts were simply divine.
And to make lunch just perfect we bumped into Kate and Mark from the English Midlands - new found friends from Langkawi Island - with whom we shared adventurers tales.
Here is Jim's fish plate starter! 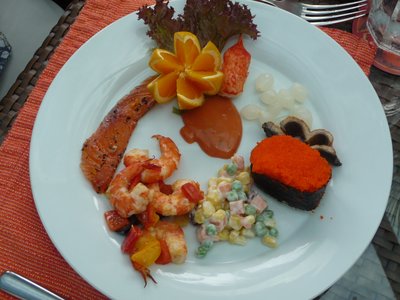 But we don't usually eat like this. Last evening we ate at the Night Market - spring rolls, chicken biriyani and roast duck with rice for just six dollars for us both, and that included a can of Sprite each.
In each country we've tried most of the local delicacies, (although we steered clear of the Vietnamese poodle soup). We've had Pad Thai and Som Yam soup in Thailand, Cao Lao in Vietnam, while in Laos we had traditional barbecue - a large clay pot filled with burning charcoal is dropped into a hole in the centre of the table and a specially made lid is placed over it. The metal lid is a shallow dome with perforations in the highest part and a deep rim around the edge. Stock is poured into the rim and quickly boils, while the dome part gets red hot. It's a do-it-yourself dinner. As soon as the barbecue is hot the waitress brings heaps of fish, meat vegetables and noodles and you just boil or barbecue whatever you want on your own personal stove.
Each country has its own eating culture. Sometimes we are given knives and forks, sometimes just spoons and sometimes chopsticks, while at other times the food is plopped straight onto a banana leaf on the table and we eat with our fingers - that certainly saves on the washing up.
We've eaten Thai, Laotian, Vetnamese, Malay, Chinese, Indian, Japanese and Italian, (Great pizzas in Hue, Vietnam).
We've had Luxembourg baquettes, French croissants, British fish and chips, American hamburgers and Norwegian salmon. We've even had pancakes with maple syrup - very Canadian eh!
Jim's breakfast this morning was Sang Me (fried noodles) with dried anchovies, roast seaweed and fried dace with black beans, followed by a quintessentially British bread and butter pudding.
At a rough estimate we've eaten in two-hundred restaurants and now we're off to Bali for a plate or two of Indonesian Nasi Goreng, (fried rice to you).
And in Vietnam we both took a cooking course so that we can entertain you all when we get home. Bon appetite!

Posted by Hawkson 18:16 Archived in Malaysia

Hmmm. I'm hungry now but all we have are scallops broccoli and shortbread for afters.

You have caught me just at lunch time. My usual soup and salad lunch suddenly just doesn't seem so appealing anymore. Oh well. Food as fuel.

You both look great - I'll have to try the Great South East Asian diet!

ps The plating is nice, but not quite up to Hawkin's standards.