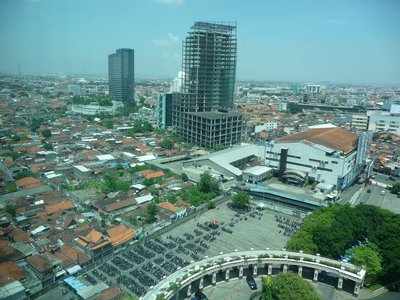 There are thirteen thousand islands in the Indonesian archipelago, stretching from the equator to Australia. Our journey between two of these islands, Bali and Java, was just a thirty-minute ferry ride. Yet the gulf between these two is greater than the gulf between Canada and South East Asia.
Language, customs and religous dogma have doomed the Balinese and Javanese to eternal rivalry and conflict.
The Balinese are predominantly Hindus whose lives are dictated by superstition and ceremony. Almost every day is a ceremony day, or the preparation for a ceremony day, or the day of rest and rejoicing following a ceremony day. Seventy percent of a Balinese' meagre earnings are spent on ceremonies. No undertaking, however insignificant, is commenced without reference to the calender, and no price is too great to appease the Gods.
Across the Strait of Bali the Javanese are predominantly Muslim. Here the townsfolk suffer the constant deafening blare of muezzines as they compete with the noise of traffic and the bellows from neighbouring mosques. There is hardly a moment's peace from four a.m. till after nightfall - hour upon hour of religious incantations blasted through huge loudspeakers high on the minarets.
Indonesia may be tolerant of non- muslims but no one can escape the constant ear bashing of the immams.
Our journey between these two worlds began when we travelled through a tranquil national park in Bali to the ferry.
The ferry, not unlike the Gabriola ferry,was crowded with locals. Unlike the Gabriola ferry the lounge was blasted with incredibly loud karaoke music from a giant screen. As has often been the case on our travels we were the only Westerners and the stewardess must have sensed our discomfort. She quickly guided us away from the melee and took us to the captain on the bridge. We were then given the entire top deck - just for us. Preferential treatment?
And when we arrived in Java at Banyuwangi the driver of a mini-bus turfed out all of his local customers so that he could turn around and take us to our hotel - very embarassing.
But this story is about the two worlds - Bali and Java: Bali is a peaceful backwater while Jave is the most populous island in the world.
We are now in Surabaya - a city of luxury hotels and enormous shopping malls; a city of sophisticated people who would not be out of place in London or Vancouver. But, around Surabaya's corners, in dirty little back alleys, there is indescribable poverty.
During the next few days we will spend time with the people of Surabaya - some of whom we already know - and we will be visiting some of the poorest people in this world - in any world.

Posted by Hawkson 04:02 Archived in Indonesia

That ferry doesn't sound too far off the Gabriola 7:50 with all the high-schoolers. Thank goodness earphones were invented or it would be exactly like your Bali ferry. Our temporary Bowen Queen, too, has a separate level for the quiet folk but the mighty, noisy Quinsam should be in service when you return.

Finally! Here you are again. I missed you, even if I don't leave my calling card. Gabriola will feel like an Island paradise by the time you return. So few people, so little noise, an island fit for an emperor and an empress. Just don't get spoiled with your current level of VIP treatment on public transportation or you will be disappointed.