Okay - so we didn't take the real Orient Express ... wait a minute .... actually we did take the real Orient Express. The 'so called' real Orient Express travels from London to Venice - hardly the Orient. Whereas we are in the true Orient; the land of Javanese rhinos, komodo dragons and orang-utans. Nowhere is more exotic or oriental than Indonesia. So, when we took the train from Banyuwangi high into the volcanic peaks of southern Java, we were truly on the Orient Express.
As we began our journey on the coastal plain, water buffaloes yoked in pairs ploughed the thick mud of the rice paddies and created a timeless image. Two hundred years of colonialism and modernization have failed to change the pictures; hundreds of peasants in conical straw hats work the rice fields, ploughing, sowing, reaping and threshing by hand as they have done for centuries. The only concession to modernity is the enormous amount of chemicals now used to ensure three bumper crops a year; herbicides, pesticides and fertilizers are liberally spread on the paddies, often by workers wearing little or no protective equipment. The conditions are medieval. Men and women toil together under a scorching sun until the rice ripens, then the threshing begins- enormous sheaves of dusty dry rice are hefted overhead then thrashed down onto logs. It is hot, heavy, back-breaking work for which the workers receive a pittance.
The rice paddies grew smaller and steeper as we climbed higher into the mountains and were gradually replaced with tomatoes, peppers, sugar cane, tapioca, durian and coffee. Every inch of this land is productive and cultivated. Bananas and coconuts grow everywhere, along with teak for furniture and boat-building, and kapok for mattress stuffing. 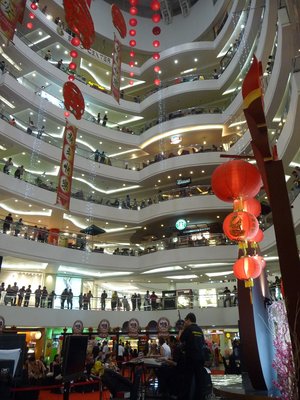 It is Chinese New Year and these are some of the decorations in one of the gigantic shopping malls in Surabaya, southern Java.
Cosmopolitan cities may be teeming with chic techno-savvy teens and rich dudes driving BMWs, but the countryside is dirt poor. Bare-breasted women wash themselves, their kids and their clothes in streams laced with chemical run-off from the rice paddies; millions of children receive little education - despite government claims to the contrary; and people who cannot afford medical treatment, simply die.
Our seven-hour journey through southern Java on the Orient Express took us through a movie that could have been filmed in the middle-ages,
This first leg took us to Surabaya - a sophisticated city of luxury hotels, highrises and office towers rising above an ocean of slums. Here we spent a few days with friends from Widya-Mandala University: Veronica, Agnes, Susanah and Elizabeth. 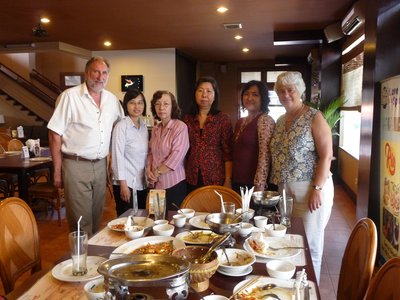 And then we reboarded our Orient Express to the ancient Javanese capital of Yogyakarta. The land was flat - three hundred kilometres of rice paddies as far as the eye could see. We travelled 'Executive class' (six hours for just twelve dollars - and that included a full meal). We weren't offered anything but 'Executive class' and when we saw the regular trains we knew why. For a few cents, thousands of locals cram the carriages and hang out of doors and windows of the local trains. We saw one train where even the driver's cab was completely crammed with passengers. There are so many occasions when we realize how fortunate we are and whenever we eat rice or drink coffee in the future we will be reminded of the hardworking poor people who made it possible.

If you are interested in world wide train travel you might want to check www.seat61.com a great web-site

Posted by Hawkson 01:25 Archived in Indonesia

While looking at the weather logo - sunshine- and noting the temperature 33 degrees, I couldn't help but think of the weather here on almost the same day; the enviroment canada weather report forcast "ice depositing fog"! It's like the last in a series of biblical plagues. Anyway the trip reads idyllically as all your journeys do.

Saw a graph on the weekend in the Sun that showed an astonishing nearly two and a half fold increase in the availability of rice per person since 1981 - but at what cost.