We are mindful that we haven't posed a brain-teaser for awhile, so here is this week's question:
How would you turn this pile of rubble ...... 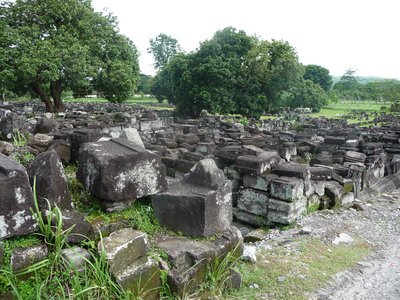 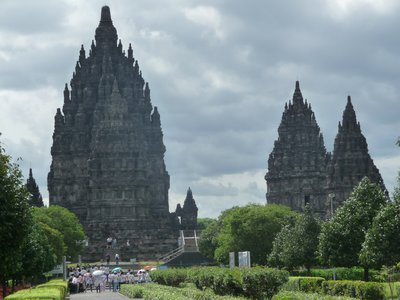 Answers , on a postcard please, to: The Curator of Religious Antiquities, Prambanan, Central Java.
The winner will receive accolades from the people of Java and a tour for two around the temple at Prambanan, (value $22 U.S.), (airfare not included).
The Prambanan Hindu temple was built around 900 A.D. as an elaborate symbol of superiority over the Buddhists whose great temple of Borobudur lay sixty kilometres away. Today, this is all that remains of the temple which stood majestically for over a thousand years on the central plain of Java until an earthquake shook it to its core on May 27th. 2006. The Hand of God, like that of a petulent kid with his big brother's Lego creation, reached out that day and flattened the bloomin' lot. Just a few of the largest stupas, (towers), survived as the earth turned to jelly underneath them, but more than a hundred were completely destroyed. The remains of Prambanan temple is still a magnificient sight, but it is difficult to see how it will ever be restored to its former glory. However, we did our bit by making a donation on behalf of those of you who contributed to the S.E.Asia fund.

Now. several of our readers have kindly suggested that we must be getting tired - even exhausted - so we thought it time that we took a break from all the hard work and fly back to Bali for some beach time. But ... Wait! What hard work? What exhaustion? For the past three months we've been chauffered and guided, we've had servants to cook, clean, make our beds and carry our bags. Life could not have been easier or more relaxing. So, dear concerned friends, believe us when we say that we are not in the slightest fatiqued and are looking forward to our next adventure.

Posted by Hawkson 22:04 Archived in Indonesia