Is this simply an elaborate dream or have we stumbled onto a movie set? We ask because, after four months in S.E.Asia, we are not certain about anything any more. Are these water buffaloes actually plowing the rice paddy, or is there a camera concealed around the corner? 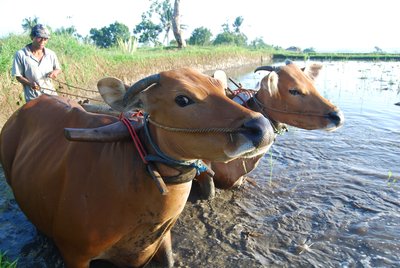 Is this woman really doing the family’s laundry in the roadside ditch? 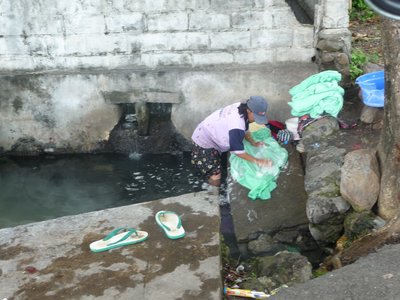 Does someone actually watch satellite TV in this flimsy thatched hovel? 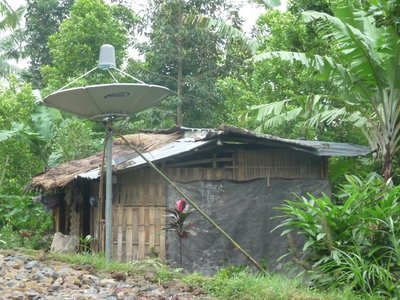 Everything here is so improbably archaic or outrageously exotic that nothing seems real. Are the locals just actors waiting for us to leave before they rev up their tractors or fire up their washing machines and dishwashers? Maybe they have second homes in Florida or condos in Cancun?
Ever since our discovery of fake monks in Bangkok we have become increasingly skeptical. We have been touted by fake taxis everywhere. Every driver or motorcyclist outside a rail station claims to be a cab for a few bucks. But what is a genuine taxi? In Hanoi we were hijacked by a real taxi driver who took us to a fake hotel!
Virtually all DVDs and CDs are copies. We saw a bootlegged “Slumdog Millionaire” long before the premiere. The DVD came from a store where every movie was illicit – many of dubious quality. Fortunately, Tony, our man in Bali, speaks the local language and isn’t duped, unlike the tourists who stock up on their way home and discover too late that they’ve bought a complete dud - even the fakes are fake. But what do you expect for a dollar? Even BMWs and Harley Davidsons’ – the ultimate Asian status symbols – may be clones. Books, medicines, batteries, jewellery and paintings may all be imitations. Fake pearls are grown in clams and sold to the vendors by the kilo. Real copies of the Lonely Planet Guides probably don’t exist here at all, and Jim just bought a genuine fake Rolex Oyster for $3. Indonesia is home to a million batik shops, but it takes a good eye to differentiate between genuine handmade silk and polyester printed in China. Even the stores are fake - one short street in Bali has four Dolce & Gabbana shops stocked with ‘genuine’ $600 D&G bags on offer for less than thirty dollars!!!
We have discovered that we are never charged the true price. There is, we are assured, a pricing scale that starts at the top with first time western visitors; dropping a little for returning bule’s and even lower for resident bule’s, before crashing for the local Balinese.
But we do not begrudge the local entrepreneurs a few dollars. After all, the average wage here is thirty dollars, (fifteen pounds). Thirty dollars an hour? No – thirty dollars a month. Just one dollar a day. So - Do you blame them for copying our bags, movies and motorbikes and for trying to squeeze us for a few bucks? We don’t.

Posted by Hawkson 20:05 Archived in Indonesia

As always, you capture the moments both with pics and words. I"m leaving on Thurs. for exotic Winnipeg to spend a month with my wee grandson. Not nearly as full of surreality, but I'm looking forward to it with all my heart.
luv
Sharron

As a Gabriolan, my first thought about the satellite dish is that it's a wonderful way to collect water with reasonable pressure head.
The blooming plant against the shack is a nice touch. A little eauty everywhere, eh?