"You just can't be too careful," our 'nanny' travel counsellor told us before we left home. Then she reeled off the top 20 of the world's deadliest diseases - all of which we were almost certain to contract on our Asian travels. We heeded her advice, had the shots and stocked up our first-aid kit with more drugs, hyperdermics and sterile swabs than the average junky. It was insurance - we told ourselves. But it wasn't cheap.
Did it work? Well, we didn't catch rabies, typhoid or tetanus. But we didn't get leprosy, bubonic plague or scurvy either ... and we hadn't taken precautions against those. However, we suffered many near-death experiences on the roads and could have come a cropper almost every day in one way or another.
Following are some basic guidelines for travel in South East Asia. (Note that this journey should never be attempted by persons of a nervous disposition).
Never expect motorists to stop, (or even slow), at pedestrian crossings.
Never assume that anyone will stop at a red traffic light.
Motorists speed up if they see little green men at a pedestrian signal - maybe they think they are Martians!
Don't think for one minute that sidewalks and footpaths are for pedestrian use.
Don't bother to look for the seatbelts in the rear seats of cars.
"One-Way Only," signs apply exclusively to the other driver.
Don't hire a motorbike that isn't equipped with airbags .... Wait a minute - what's a motorbike airbag? We knew you would ask, so we took some photos to show you.
Here are a couple of motorbike airbags - off duty. 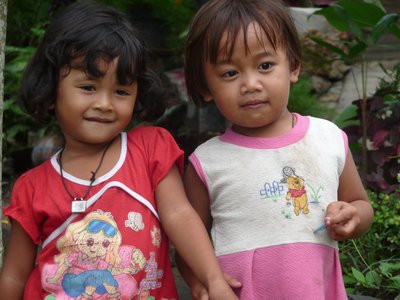 Yes, they look just like a couple of cheeky little toddlers walking by the side of a busy main road. (Note that children under two are rarely left to wander on the road without the supervision of a three-year-old sibling). But they are actually airbags in-waiting.
Here's what a couple of airbags look like when in use. 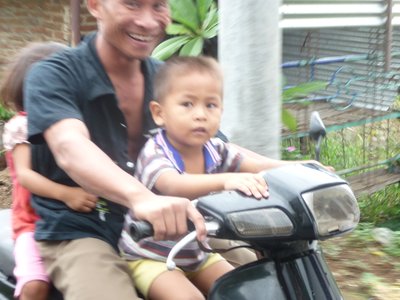 Notice the broad smile on the adult's lips. He is very happy because he is protected back and front by a couple of squishy little airbags. Well-done dad - although you should be wearing a crash helmet. Just think what could happen to your brain in a really nasty crash!
Here's an airbag who is determined to grow up with more brains than his mother, (if he lives that long), so he is doing his homework on the way to school. 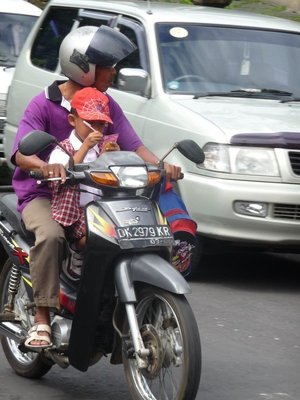 And here is a baby airbag in training. Note that the 'training' position is as a central airbag. He will have to wait until he is big enough to cling on before being promoted to a front or rear bag. 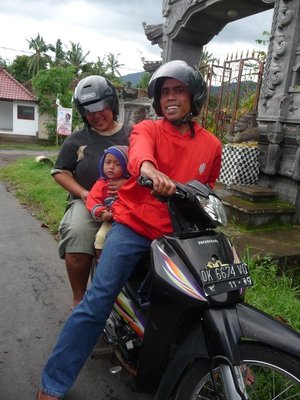 Note that both mum and dad are wearing crash helmets - way-to-go parents. Don't you just love to see parents bringing up their kids safely and responsibly?

Posted by Hawkson 19:47 Archived in Thailand

Gasp! I guess the only thing that surprises me is that anyone wears helmets at all. Are they some fashion statement? Love the sandals on rider number two. Wait till he gets branded with a hot exhaust pipe.