The Vivacity of Daily Life

When the French King, Louis XIV, pronounced that, "Nothing is more tiresome than ceaseless pleasure," he had never strolled the sugary palm-fringed beaches of the southern seas in the pink warmth of the fading sun, nor had he bathed in the crystalline water that briefly turns to champagne as it effervesces onto the sandy shore. After four somnolent days in this Siamese Nirvana, Sheila is ready to abandon retirement for a second career as a professional sunbather. Louis XIV would not have approved. However, he was a man of innovation and mechanization - often operating the valves and sluices that set the spectacular fountains of Versailles in motion - so he would thrill at the occasional commotion as a Jet-ski roars across the placid bay leaving a turbulent trail of foam and fumes. We, on the other hand, prefer to be lulled by the gentle swish of wavelets rucked up by a lazy breeze. 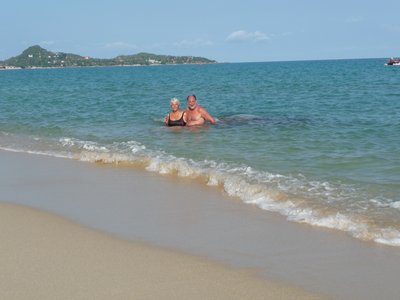 Blue burns itself into the memory here - blue in all its glorious natural shades: cyan, indigo and navy through azure to powder - both sea and sky conspire to turn our world blue.
The Provencaux appropriated the epithet 'Les Cotes d'azure' for their corner of the Mediterranean, but it is a name that would happily apply here. Throughout our jouney we have been constantly struck by the vivacity of colours and the vivacity of life in south east Asia. Life here seems much sharper - more in focus - than at home. The colours are, metaphorically, more black and white. But life itself is more piquant - more on the edge. It's richer and poorer; faster and slower; sweeter and bitter. In our world the sharp edges have all been rounded off; the road is generally smooth and the temperature thermostatically controlled.
Here we are living La vie en rose without the filters. You can almost taste the sweet juice of these rambutans 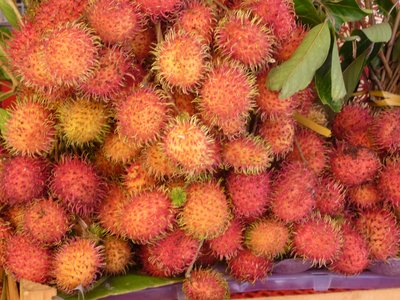 .... and hear the gentle breeze sighing through the rice in this paddy. 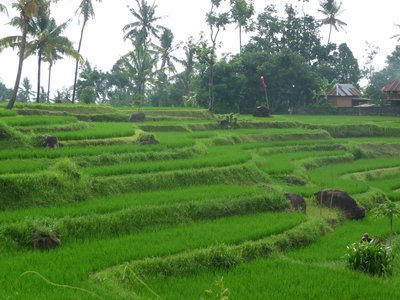 .... and smell the scent of these exotic flowers 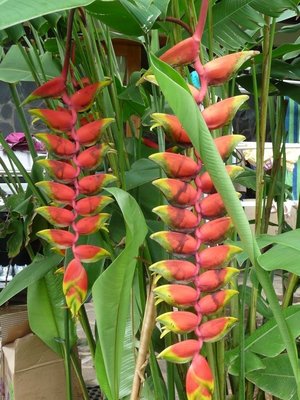 Perhaps the Balinese know something that we don't when they leave their offerings at the shrine. Maybe there is a god after all. 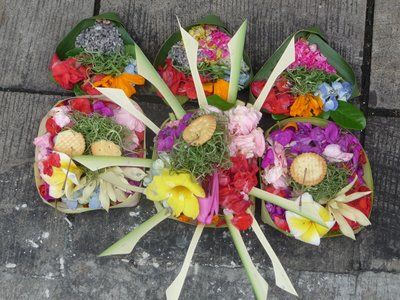 Posted by Hawkson 18:34 Archived in Thailand