South East Asia may be overlain with a thin veneer of modernity - many people own cellphones, satellite T.V.s and motorbikes - but underneath there is poverty and squalor of Dickensian proportions. We were well aware of the disparity between our lives and most of theirs and we know that few of them will ever be able to hop on a flight and visit our world.
As we walked the broad, clean streets of London, we wondered what our new-found Asian acquaintances would make of sidewalks that are not pot-holed minefields; of pedestrian crossings where drivers actually stop; of motorists who, (generally), obey traffic signals and are considerate to other road users. We also wondered what they might think of these fortifications around a pavement repair. 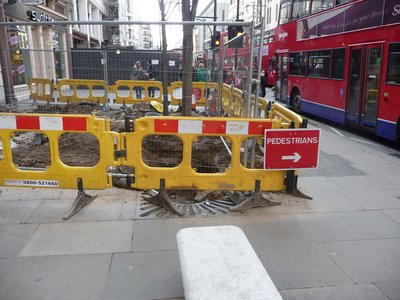 Amazingly, it's still 37 degrees here. Unfortunately, that's farhenheit and we are now accustomed to 37 degrees celsius. The sun may be shining here, but it doesn't work. However, Spring is just around the corner and London is already in bloom. 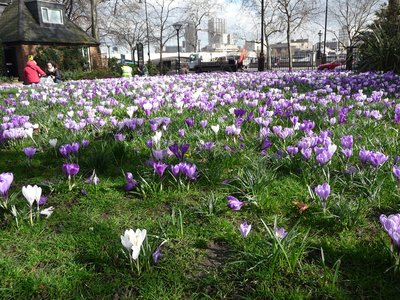 As we stroll the wide, uncluttered pavements of this historic city, we find ourselves walking through the past, present and future simultaneously. This place has been a metropolis for two-thousand years and relics of every era remain. Roman walls, Norman cathedrals and Elizabethan fortresses stand shoulder to shoulder with modern architectural wonders. Here is Admiral Lord nelson looking down on Trafalgar Square and the Canadian Embassy. 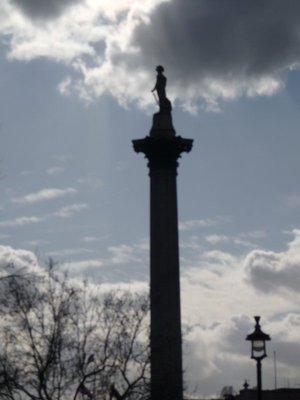 As for the future - if you are desperate for a pee in London, just text a certain number. Your cellphone will be pinpointed by GPS satellite and you will be directed to the nearest public loo. What a relief it will be when this is introduced on Gabriola. 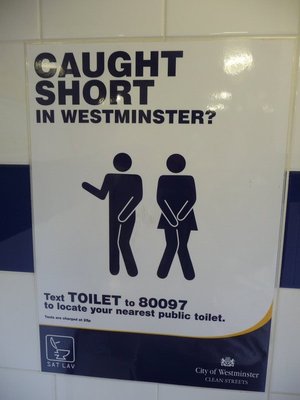 Now we are leaving this futuristic city for the medieval town of Devizes in the West of England. We hope the internet has reached this forgotten corner, but we may have to rely on the pony express. So it may be a few days before the next instalment.

Posted by Hawkson 08:35 Archived in England