A Journey Through the Past

Today we left Jim's hometown of Devizes to visit Sheila's brother in Worthing and found ourselves travelling through time. First stop - Salisbury. 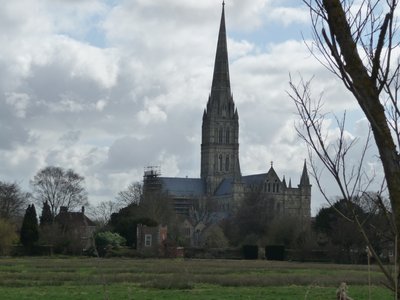 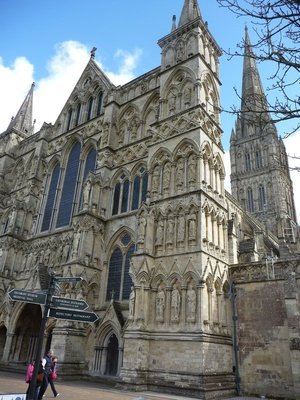 This Norman cathedral took thirty-eight years to build and was completed in 1258. This may seem absolutely eons ago, but, in British archeological terms, it is very modern. To put it in perspective: just up the road is Stonehenge and the remains of the Neolithic hill town of Old Sarum, (both circa 3,000 BC.). You can still visit the fort at Old Sarum, (built during the Iron Age, around 500 BC), which was used by the Romans from AD 43 to AD 410. Following the Roman withdrawal, Cynric King of Wessex captured it in 552; the Saxons called it a 'considerable town'; and in 1086, following the Norman invasion, William the Conquerer convened his court there. A great cathedral was first built atop the hill at Old Sarum, then taken down and rebuilt on the marshes below - don't ask us why.

Jim was once a policeman in Salisbury and he tells of the night a couple of young thugs armed with pistols and hammers viciously attacked an elderly postmistress and stole the day's takings. The villains made off in a stolen car which was spotted by Jim. He gave chase and frantically called for back-up. Alas, his radio transmitter worked but his receiver didn't - so he was certain he was on his own as he sped after the crooks. But his calls had been heard - he wasn't alone. He didn't know that just over the hill lay a roadblock of trucks and police cars. So, he braced himself for impact and violently smashed the crooks' car off the road, then nabbed them from the wreckage.
The elderly Postmistress survived the ordeal and was awarded the George Medal for bravery by the Queen. So what was Jim's reward for catching these vile criminals and sending them to jail for many years? Jim was ordered to take a one-day driving course as punishment for damaging his police car. There is absolutely no fairness in this world!

After Salisbury we went to Portsmouth to see H.M.S. Victory. Here is the grand old lady. 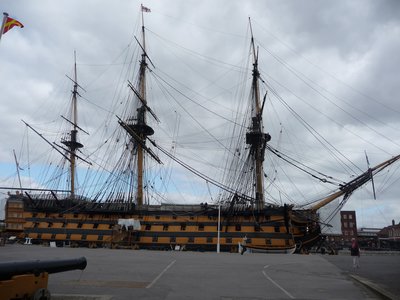 This was the flagship from which Admiral Nelson directed the Battle of Trafalgar in 1805, and on which he died. His nemesis, Napoleon Boneparte, lived until 1821 - sometimes it pays to be a villain!

Also at Portsmouth are the remains of Henry VIII's warship, the Mary Rose, which sank on July 19th. 1545. We would show you, but who wants to look at a pile of rotten old wood - even if it is nearly 500 years old?

Next stop on the road to Worthing is Arundel, the family seat of the Duke of Norfolk. This is his pad. 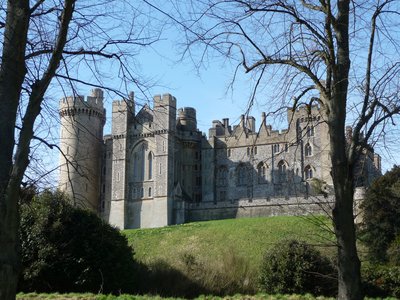 This castle was first completed in 1068 so it is not surprising that the owners had to do a few renovations over the years. It's been owned by the same family since 1138, so they can only blame themselves for the lousy plumbing, leaky roofs and ghosts in the bed-chambers.

Posted by Hawkson 09:23 Archived in England