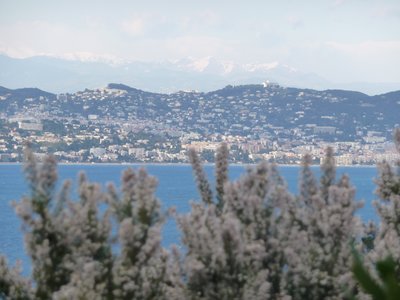 From our apartment high atop the red mountains of l'esterel in Provence, we look across the azure Bay of Cannes to the snow capped peaks of the French Alps .... Sounds idyllic doesn't it? Well it is, and we would coax anyone with a son or daughter to suggest they live here so as to have a reason to visit. Here is another view showing the Alps. 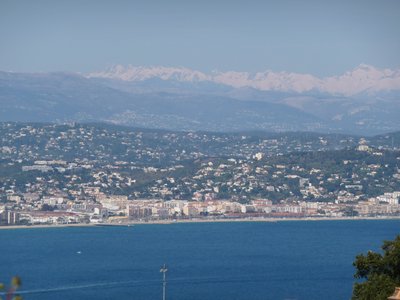 However, after 4 months in S.E.Asia, we finally bumped back to earth yesterday when we had lunch in little snack bar on the beach in Theoule sur Mer.
Theoule is a sleepy seaside village about 15 kms west of Cannes and in some ways it reminded us of Phu Noi in Vietnam where we also ate in the beachside snack bars. Yesterday's lunch was, in South East Asian parlance, Same-Same ... but it was very different. The biggest difference was the price. Lunch for two in Vietnam - 5 dollars, including tip. Lunch for two in Theoule - 75 dollars, not including tip! There were four of us in Theoule and the bill for lunch was equivalent to 5 months wages for the average Vietnamese!
Now the sun has finally been turned on, the temperature is rising and should hit 18 today - a vast improvement from the wintry temperatures we encountered when we arrived. The mimosa trees are golden with blossom in the bright sunshine and summer is just around the corner. The beaches of Cannes and Nice will soon be packed with northerners desperate to escape the colder climes.
Here is a view of one of our favourite towns on the Cotes d'Azure ... it is Antibes with its medieval buildings and Napoleonic fort. 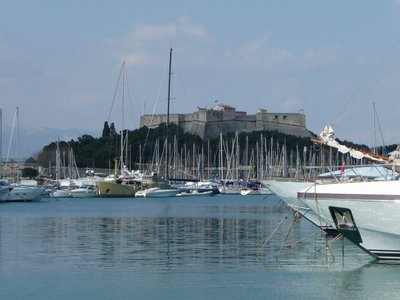 Floating in the Bay of Cannes is the island of Ste. Marguerite. The island's fortress is the legendary place, (as readers of The Dave Bliss Quintet will know), where the Man in the Iron Mask was imprisoned from 1687 - 1698. The actual cell can still be visited ... it lies behind the second window from the left. 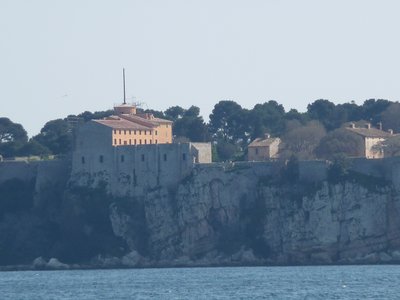 Posted by Hawkson 02:56 Archived in France

Camilla requests you bring her a bowl of coq au vin. She looks forward to seeing you (she is currently scouting the property for mice). It is 10 degrees here somewhat like Cannes.

By the way, Camilla avait pratiqué ses qualifications for catching mice on the knitted mice she obtenues pour Noël as well as the divers petits tapis dans la maison.

Reread the book description. Great to match it with the actual photos. Nice job.

Would it be terribly provincial of me to say the view is nice, but it's not the straight of Georgia. You will be home very soon and I have been a slacker with these comments so I thoought I'd get on to it tonight. Looking forward to seeing you soon.