Family Matters
No trip to England would be complete without family visits and this time we greeted Sheila’s great nephew … just two weeks old. Here’s the proud great aunt, together with proud granny and newcomer Tobias … 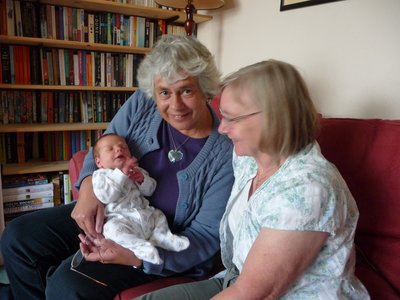 And at the other end of the scale, relatively speaking, is Sheila’s second cousin, Eileen. Here she is with Sheila and Roger enjoying England’s late summer sunshine. 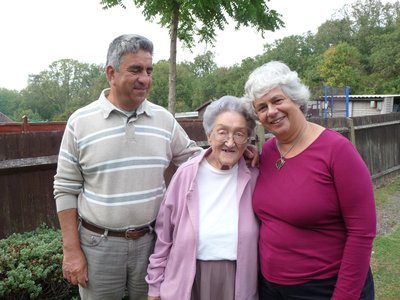 But we have left sunny England for Iberia where we were met with thunder, lightning and a hailstorm of biblical proportions. The streets of Santa Pola turned into raging rivers, while the pavements were coated in a thick crust of golf-ball sized hailstones. We sheltered in a restaurant and enjoyed our first real Spanish meal …Thai curry and Peking duck … cooked by a Vietnamese chef and served by a Chinese waitress. Jim’s Spanish proved useless as Sheila chatted to the waitress in Mandarin. However, he could easily chat to the other customers – they were all English.
Our journey from England began at Gatwick airport where the check-in clerk gave Jim’s linguist sensibilities a workout when she seriously questioned, “Has anyone put anything into your bags without your knowledge?” “How the heck should I know,” would have been a rational reply, but Jim recently caused a cross-border incident when entering the U.S. “Where are you going?” asked the humourless American Customs guy, after Jim said we were taking a round trip. “We’re going to home to Gabriola,” replied Jim truthfully. “That’s the nature of a round trip – you end up where you began.” The Yank was less amused than Queen Victoria and turned our car upside down, so this time Jim wisely kept his mouth shut at Gatwick.
It’s our second day in Spain and we have yet to meet a Spaniard. Even our host’s friends who met us at the airport are Dutch. Our home from home is just perfect – a lovely house with views over the ocean and mountains … like Gabriola. Same – Same, but very different.
Here is the view of Alicante from our swimming pool - Nice eh! 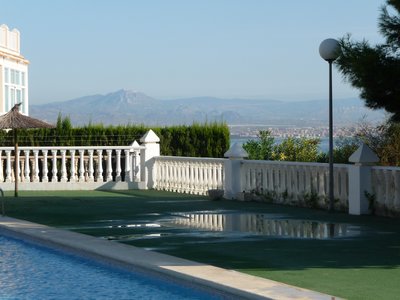 Posted by Hawkson 08:40 Archived in Spain