O.K. fans of "My Fair Lady." Sing along with us ....
"The rain in Spain falls mainly on the plain, repeat ...The rain is Spain falls ...."
But we are not on the plain. We are on the Mediterranean coast.
It is a balmy 25 degrees. The sun blazes from dawn to dusk and the sea and sky meld into a beautiful azure blue. Unfortunately, that's not here. That's home in Canada. Here it's been peeing with rain ever since we arrived.
Before we left home a few weeks ago we were concerned that the couple with whom we exchanged houses, (Nati and Antonio), would find Gabriola so unbearably cold, wet and windy that we prayed to the weather gods to be kind to them. Apparently it worked. Now, if only we had thrown in a prayer for ourselves! 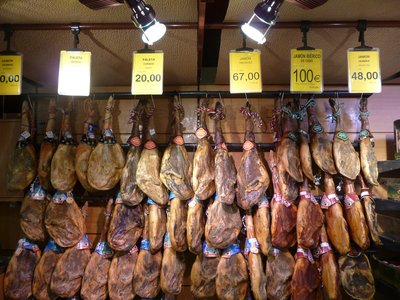 No matter, there are compensations ... the food is great, (although some of these hams cost a whopping 165 dollars a kilo), and the wine is so flippin' cheap that you can bathe the family donkey in it. Just one dollar will get you a fairly presentable bottle of local plonk or one and a half litres of rotgut in a box. Or, you can be like us and splash out three bucks for a 2006 Rioja. And, dear Canadian friends, before you put down the Kleenex, we should tell you that we paid two bucks fifty for a bottle of Cava, (Spanish Champagne). So, once you've dried your tears, take this to your nearest liquor store and ask who's picking your pocket - bet they blame Stephen Harper!
Life is certainly cheap here - though not Southeast Asia cheap - and there are few inconveniences. Drivers stop at red lights and pedestrian crossings; the beaches and streets are clean and uncluttered by motorbikes; and we haven't been accosted by a single tout or a beggar. Our only complaint, other than the weather, is that our quest for a meaningful conversation with one of the locals is still unfulfilled. The place is teeming with foreigners - but not of a Spanish persuasion. Today we even bumped into one of Jim's British police colleagues. All right - confession time - we knew that Gordon lived here and we planned to meet for lunch. Gordon and Jim served together in the Wiltshire Constabulary in the late 60's. Gordon is now a well known artist who lives in Almeria in Southern Spain. His website is: www.gordon-maddock.com/estudiocampana
Here is Gordon with his latest painting ... The last night of the Proms. 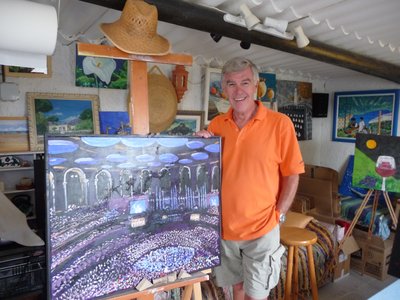 Now, we'd love to show you photos of ancient monuments, medieval streets and historical artifacts - but we can't. Everywhere we have visited so far has been ultra-modern urbanity; thousands of white, neat-as-a-pin houses and concrete apartment blocks that sprawl knee deep along the coastline as if they have been stranded ashore by a giant wave. But it is late September ... the shutters are down, the beaches almost deserted, and the "Kiss-me-quick" trinket merchants have packed up for another year. The ten-week tornado of summer tourists that began in mid-June has finally fizzled and the streets have been largely given back to the locals. But don't be fooled - local doesn't necessarily mean Spanish. Many Brits, Germans, Russians, Dutch and Scandinavians now call the Costa Blanca home and, judging by the numbers of BMW's, Mercedes and Audi's scorching past us at double the speed limit, many brought their piggy-banks with them. Psst! Don't get Jim started about the recklessness of German gas-guzzlers - especially the Audi's.

Now it's Thursday and the sun has returned in full force. The storms have drifted east to Sardinia and Sicily and we are heading to the beach.
Hasta luego.

Posted by Hawkson 08:32 Archived in Spain

Hmmm - what is the price of real estate there? Could we sell in Abbotsford, buy in Costa Blanca and still manage to pickle the liver before I'm 80?