We have finally found Spain. Alicante is just a 30 minute bus ride from our holiday abode, but it could be in another country. For the first time since we arrived we encountered waiters who didn’t answer in English and we saw real Spaniards going about their daily lives.
Alicante is a manageable city with an ancient Arabic fortress and a palm fringed natural harbour - much like Cannes.
Here's the seafront ... 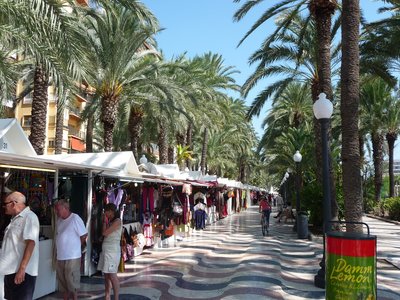 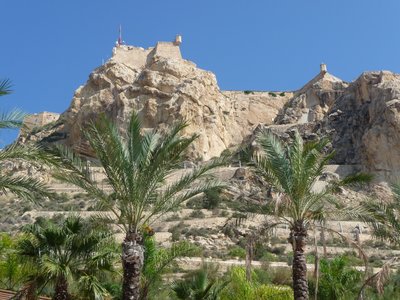 The Romans built here long before the Arab Moors put up their castles, but most of the architecture is very modern. Here on the Costa Blanca sun seekers from northern Europe snapped up holiday homes faster than the developers could spit them out. However, when the U.K. economy imploded and the pound fell through the floor, many retired Brits were forced to swap their dream haciendas for a bed-sit in Brighton or a mobile home in Morecambe Bay. “For Sale” signs are everywhere as cash-strapped pensioners try to get a return on their investment.
But, despite 20% unemployment, there’s plenty of good news.
Sleek trains tear across the countryside at over 200 miles an hour and by next year this country will have the most extensive high speed rail network in the world. Further south in Almeria we witnessed an astounding sight - thousands of enormous greenhouses blanket the landscape as far as the eye can see. The arid hillsides and valleys have been transformed into one of the most productive areas on earth. With EEC funding, Dutch know-how and massive amounts of agro-chemicals and desalinated sea water, the Spaniards have created an artificial oasis that can feed half of Europe.
But who needs desalinated water when it just keeps raining?
No matter - it is supposed to stop by Thursday.

Here is Sheila in sunny Alicante - before it started raining again. 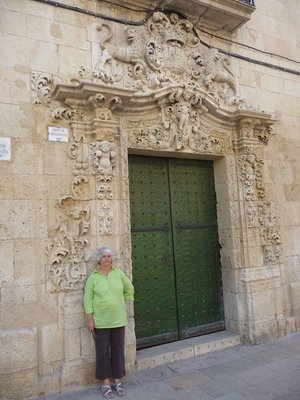 Posted by Hawkson 03:12 Archived in Spain

Hi Jim and sheila:
you are moderating this so you can delete it. For some reason I can't email either of you on fishkisser and sheila's hotmail. Has anything happened?Pls email me at taboyle@gmail.com

I'm SO pleased to have accessed your blog. I tried what i thought I had used when you were in Asia but now I've got it!! May the sun shine on you both....