Blog followers may remember the time we were Hijacked in Hanoi, well now we’ve been held Captive in Caravaca.
Yes - that’s right - after a gruelling five hour drive on a roller coaster from Cordoba we badly needed some R and R. Dot, our borrowed SatNav gal, couldn’t help with a decent hotel, so she directed us to the Tourist information Office.
“I think you need a place of peace and serenity,” the attendant said after hearing of our bone-jarring journey. We readily agreed and eagerly headed off to the town's “other hostelry.”
And, guess what, dear readers, we ended up in a Monastery cell - a real Monastery cell in a real Monastery with real Monks.
It seems that monastic life is not so appealing as it was 400 years ago when the place was built, so the poor Monks have been reduced to letting their empty cells to mere mortals for a few bucks a night… seventy-five actually.
The two enthusiastic Monks who greeted us were very nice young men. They spoke no English but our Spanish is coming along so Sheila asked them to which order they belonged. She thought they said, “Nazarines” but it sounded more like “Nasturtiums.” (In any case they were definitely a couple of pansies). We should have run at this point - and would have done so had there been another hotel within fifty miles.
Here’s the Monastery at night - the only time we saw it. 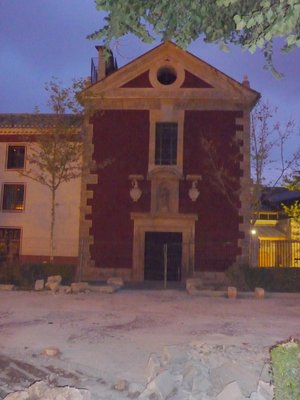 And here’s Sheila in the cell … 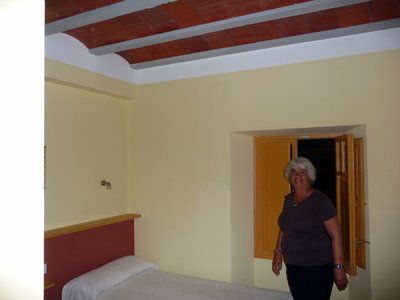 The cell was, as you might expect, very Spartan. Just two very firm beds overseen by a gruesome painting of Christ with blood streaming down his face, and, in the corner of the room, a life-sized tableau of Christ’s dead body being anointed by Mary Magdalene. If these images were designed to deter hanky-panky - they definitely worked in our case.
Here’s the tableau … 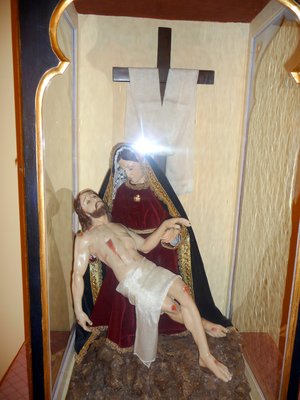 According to the guidebook: Caravaca is a pretty town with many medieval streets and picturesque squares. It is the site of one of the oldest settlements in Spain and was a stronghold of the Knights Templar. It has a major fortress which was used by the Christians in their fight to oust the Muslim Moors in the 13th Century.We would love to show you some pictures, but we can’t - because, in the morning when we planned to take a tour before heading off to Barcelona, we discovered that we were prisoners.
Anyone who believes that Monks are up at dawn, taking cold showers and singing matins, would be sadly disabused here. At 8am. this lot of zealots were still in their cells with every door and window in the entire place locked and barred. We tried them all. There was no way out. We tried making noise; we stamped around the corridors and talked loudly - no one came. We were on the point of sounding the fire alarm when two very guilty looking monks slipped out of their cell and let us out.
By now it was too late for a tour so here’s another night picture.

Hasta la vista Caravaca - we'll see you in daylight next time... if we don't end up in the cells again.

Posted by Hawkson 01:01 Archived in Spain

Just caught up on your blog after losing it for weeks (the blog). What an adventure! Inspector Bliss in a locked cell--wonderful.
Off to Ottawa next week for Jennifer's grad.

Inspector Bliss locked in a cell--priceless!
Just getting caught up on your blog. Lost it some weeks ago (the blog) for some unknown reason and then it wouldn't accept my comments. Okay now I think.