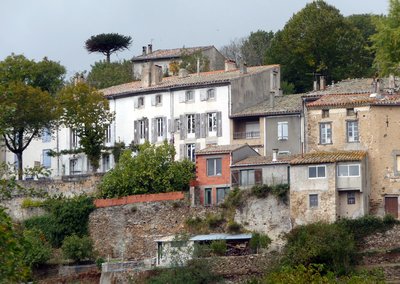 Two weeks in Languedoc - Not … “A Year in Provence.”

Dorothy, our SatNav senorita, put on a French accent once we had crossed the Pyrenees to pick up a car from Mr. Hertz in Perpignan. We gave Dot the address of our next domicile in Cuxac-Cabardes and sat back to enjoy the ride. She didn’t hesitate - she took us all around the one-way system in Perpignan straight back to the car hire office. Did she know something? Maybe she was trying to warn us?
“Rustique” would be the kindest description of our new home-from-home in the French mountains just north of the Pyrenees. “Our” house must be at least 300 years old and the plumbing, heating and electricity may well be original! We had three power cuts during our first evening.
“C’est normal,” explained our helpful neighbour, a kindly native who is prematurely aged by curvature of the spine. She later came to our door with an enormous bag of chestnuts. We didn’t want to appear greedy so took a few handfuls - not enough apparently, so we took more. After many “Merci biens” and “Bon soirees” she left. Five minutes later she was back, insisting that we should take the lot - but not the plastic grocery bag. She needed the bag, she joked, to put over her head so that people wouldn’t laugh at her in the street.
After a month dealing with the many different languages of Spain it’s nice to be able to converse with the locals here with a reasonable chance of being understood. And when we have slipped, we’ve often slipped into Spanish.
However, when it comes to dealing with the baker our French may not be up to snuff. The baker is the best informed person in any French village. Everyone goes to the Boulangerie and everybody gossips there. Our Boulanger is a wheezy, pot-bellied man who’s eaten far too many of his own loaves. On our first visit we found him plucking several songbirds that he had just shot - nothing is too small or pretty to end up in a French oven. He handed us the bread - who needs clean hands or wrapping paper - and carried on plucking.
Then we needed wood for the fire. This may be the south of France but up here in the mountains it can get mighty chilly at night so we asked him where we could buy some. “I can sell you a little …” he suggested, as if he would be sacrificing his own meagre supply. “For a very good price.” We agreed, we thought, on a small stack of wood for twenty euros. However, when the stack arrived it had doubled in size and price. “Too much,” we protested, but he didn’t really want to hear. “It is very good wood,” he explained.” “Undoubtedly,” we agreed, “but there’s no way we can burn that much in two weeks.” “It’ll keep,” he protested. “We’re only here for two weeks,” we said, but he wasn’t deterred. “Maybe when you come next year …”
We almost won in the end - half the load for half the price. But, for that price he could not deliver it all the way to the garage - he would drop it by the roadside and we would have to carry it the remaining fifty feet.
We carried it to the garage and triumphantly shut the door - and it locked!
We had opened and closed the garage door several times without a key - it didn’t have a key - and it didn‘t have a window either. So there we were, with twenty euros of the baker‘s finest firewood locked in our garage , facing a bleak night in the Black Mountains of Languedoc-Roussillon. 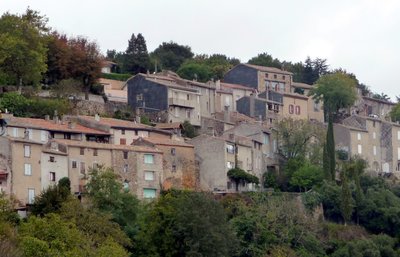 Posted by Hawkson 01:41 Archived in France

Hi Sheila and Jim. What town are you in? We just spent a few weeks in and around Azille - a small village between Carcassonne and Narbonne. We're in Geneva now and heading home after the weekend. See you on Gabriola. Jane