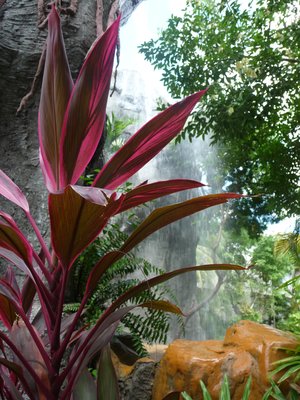 It is never easy to paint a vivid picture of an idyllic setting; to capture the sights, sounds and scents of a truly exotic location; to put into words the awe and excitement of a really magical place.
Naturalist David Attenburgh probably does it better than anyone else and this is how he might describe our current situation.
"In the heart of the Malaysian jungle, under a relentlessly burning sun, we trek into a coconut fringed oasis. An emerald watering-hole fed by a fifty-foot high cascade of cool clear spring water is home to a myriad of lizards, toads and other aquatic life. Troupes of mischievous macaque monkeys are never far away, and the fern covered trees are alive with the alarm calls of mynahs and other exotic birds. A couple of clumsy toucans clatter overhead in the canopy. A tiny weaver bird is painstakingly weaving an intricate nest in the palm fronds above us in hopes of attracting a mate. Sea eagles circle effortlessly overhead; kept aloft by thermals of dense humid air rising from the perpetually moist jungle. Fluffy cumulus clouds form rapidly in the heat of the day then evaporate into thin air before our eyes. Banyans, bamboos and a dozen varieties of palm trees circle the pool, while lengthy liana vines snake down the rocky surface of a cliff that rises like an ancient fortress from the jungle floor and blocks our path. What mysteries lie beyond? Has mankind ever walked this path? Will Tarzan swing out of the jungle and dive into the depths? Will we fight off the fear of leaches and pirahnas and swin in this liquid Nirvana?"
Probably - Because this is actually our hotel's swimming pool.
There are no leaches or pirahnas here and the only Tarzan is the Bangladeshi pool boy who is about to swing by with a couple of icy beers and a plate of sandwiches. And when we have tired of the pool we will walk along the white sand beach to another oasis. There we will stop for a drink as the sun sets at the end of another perfect day. This is life on Langkawi - a small forested island just like Gabriola. Same - Same, but oh so very different. 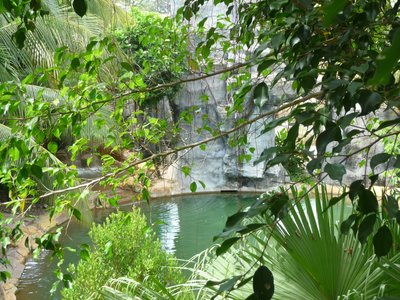 In Memory of Dennis

We are now on the tropical island of Langkawi, 30 kms off the northwest coast of Malaysia in the infamous Andaman Sea. We are catching our breath on the spectacular soft sand beach for a week while we plan the rest of our trip.
Being on an island reminds us of Gabriola, and since we learned of the death of our dear friend's husband on January 1st. our thoughts have often turned to home.
We can't be there to support and help Ruth at this time, but in memory of Dennis we would like to share some of the
pictures of beautiful flowers we have taken on our journey. With love to Ruth. Sheila and Jim 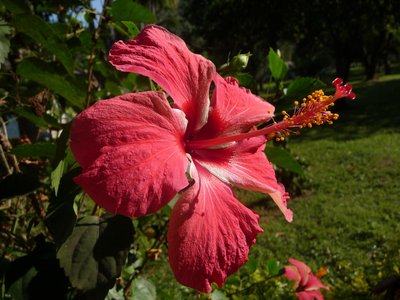 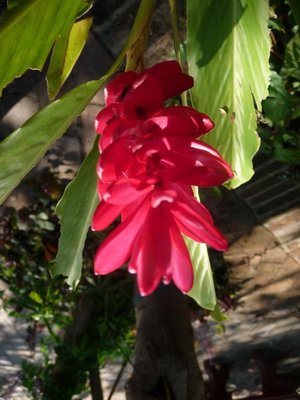 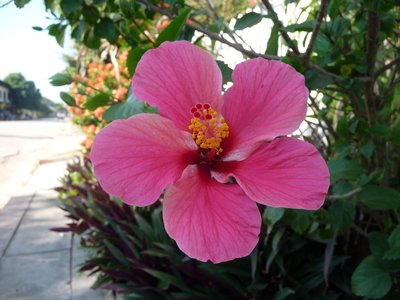 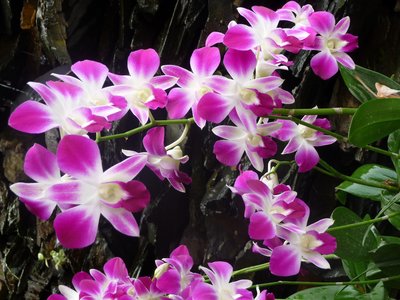 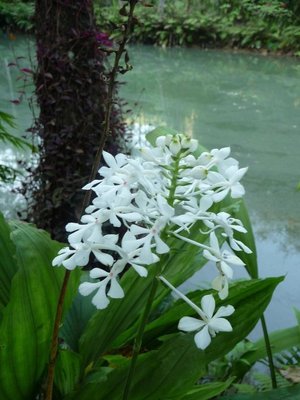 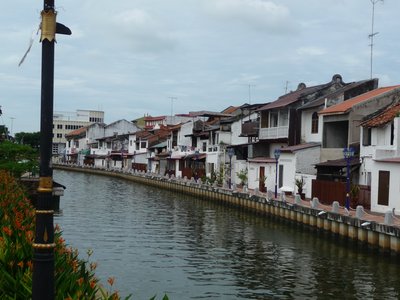 We have always felt a certain shame in not having the courage to participate in the New Year's Day plunge, so this year we decided to break the ice and throw caution to the wind. Let it be recorded that at 7.30 am on January 1st. 2009, we left our waterfront cabin and dived into the ocean off Cherating Beach, Malaysia.
Imagine our dismay when we discovered that the water was a tepid 30 degrees C. (even warmer than the bath water in the Grand Continental Hotel, Terengganu). Undaunted, we swam around for half-an-hour seeking a chilly patch. We gave up eventually, telling ourselves that we had tried and that it's the thought that counts.

We have now returned to the west coast of Malaysia - a day's drive through plantations of every kind. On Gabriola we brake for the deer and raccoons. Here we brake for monkeys, goats, water buffalo and the road-kill remains of a six-foot python. Same, same but very different.

The tropical flora is stunning with flowers and fruit of every kind. The regulars are everwhere - oranges, coconuts, pineapples, bananas and papaya - but so are exotics like star fruit, tapioca, pomelos, cashews, tea and rubber.
Now we are in Malacca - the Dutch/British trading port of southern Malaysia - with its narrow streets of colonial houses and a museum which houses the largest collection of empty display cases we have ever seen. We found room after room of empty glass cases - no exhibits and no attendants of any kind in the entire place. We still don't know if someone broke in during the night and nicked the lot, or if the curator bought a job lot of display cases and is still hunting for Malay artifacts.
Malacca, (also spelled Melaka), is a fascinating town with Portugese, Dutch and British architecture housing hundreds of Chinese and Indian stores. The only thing missing - in fact the one thing that seems to be missing throughout Malaysia - is anything Malay. We have been here for nearly two weeks and have yet to encounter Malay culture.

Tomorrow we return to Kuala Lumpur and then fly to the island of Langkawi in the extreme north. Maybe the sea will be colder there? Maybe we'll discover the true Malaysia.

Happy New Year to you all.