Koh Samui, with miles of coconut fringed beaches and tepid azure waters, is an island of Paradise in the Gulf of Thailand. This is how it should look ... 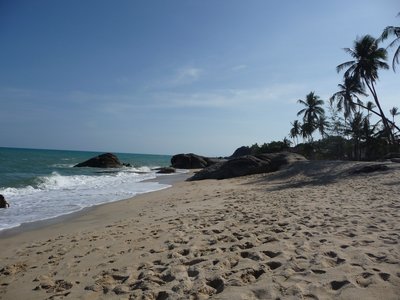 But fifty thousand Europeans beat us to it. Recession? What recession? This place is bursting with French, Brits, Swedes and Russians. And when we took a pre-dawn stroll along the beach we found the Germans already preparing for an invasion.
In Kanchanaburi we took a train across the River Kwai on the Railway of Death to Nam Tok, near the Burmese border, and found ourselves sardined into an airless carriage with an entire regiment of Thai Scouts and Guides. 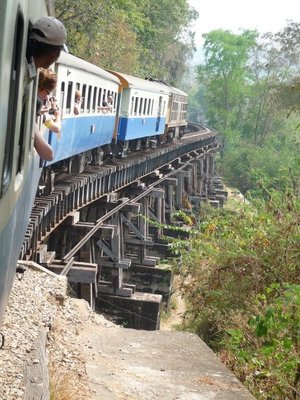 We persevered, feeling that our ordeal in the oppressively hot, overloaded coach, (circa 1944), was designed to heighten our understanding of the torture endured by the allied prisoners of war.
So - this morning, when we stumbled upon the Germans staking out vantage points on the beach and building barricades of loungers, chairs and umbrellas, we assumed that they were still sore about D-Day and were determined not to be caught napping again.

As we begin our last full week in South East Asia we want to stop the clock. Four months have simply shot past and we would be quite happy to go round again. We can't, not right now, but looking back over our blog reminds us of all the wonderful places and things we have experienced. It also reminds us of some of the more amusing moments that we neglected to mention - like the cyclo driver in Hue, (pronounced HWay, who appeared to be at least seventy-years of age. This scrawny, toothless, old man was quite prepared to pedal both of us around the ancient capital of Vietnam in his tricycle rickshaw, but we insisted that our combined weight would cripple him for his remaining few years. "No problem," he exclaimed as he pulled out his cellphone and whistled up his even more decrepit partner. We conceded, and were then astonished at the strength of these cycling seniors as they took us around the temples and palaces of this interesting city. It was only as we were on the final stretch that we discovered that our geriatric pedallers were in their early forties. It must be a hard life being a cyclo driver.
Cellphones, (mobiles), are far more ubiquitous here than at home, but we were astonished when the woman rowing us in a coracle to a floating fishermans' village in HaLong Bay carried on a lengthy conversation whilst sculling with a single oar.
Perhaps the strangest event occurred in Ayuttaya, Thailand, when Jim took an unexpected, and potentially catastrophic, side trip. We have written ad nauseum about the intolerable state of Asian sidewalks and Ayutttaya is no exception. In an effort to sidestep a speeding tuk-tuk and avoid falling into an open sewer, Jim slipped off a broken kerb and fell headlong into the road. Not such an unusual occurrence, especially where the sidewalks are more cratered than Normandy beaches in June and any usable space is colonised by motorbikes and hawkers. But, luckily for Jim, this is where catastrophe turns to comedy. As he fell, his right shoe - a laced up sneaker - was inexplicably forced off his foot and it flew high into the air. Jim landed heavily on his back in the road and, to his astonishment, saw his own shoe hurtling towards his face. To the amazement of Sheila, and the dozens of bystanding locals, Jim instinctively snatched his shoe mid-air, slipped it on his foot, stood up and carried on walking as if nothing had happened.
Did the crowd applaud?

And the winners are - Roy and Barrie Innes with a score of 95%. Congratulations - your prize awaits you at The Siam Riverside Hotel, Bangkok. (AIRFARE NOT INCLUDED).

Here are the answers to yesterday's quiz. 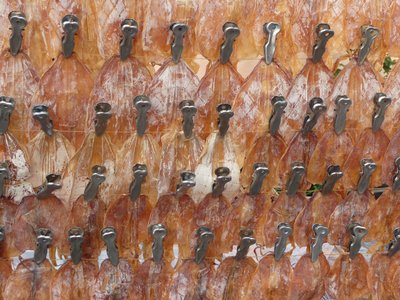 These are squid drying in the sun in a market in Kanchanaburi. Each squid is clipped onto a wire mesh using a spring clip.
These are dried palm fronds woven into a special motif which, according to the Balineses Hindus, will keep a motor vehicle from accidents or breakdowns for the next few months. Every vehicle, motorized or otherwise, has to be religiously blessed in an elaborate, and expensive, ceremony to ward off the evil spirits that can otherwise cause catastrophe. And the absolute conviction in this protection is probably the reason that they have no problem driving around on motorbikes with their entire family on board - and not a crash helmet between them. 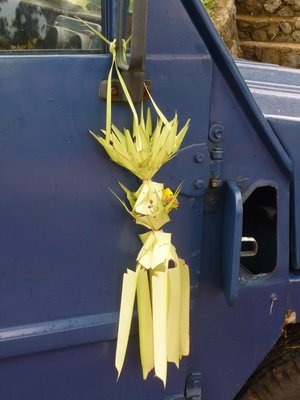 These are garlands of offerings that are hung over every shrine both by Hindus and Buddhists. 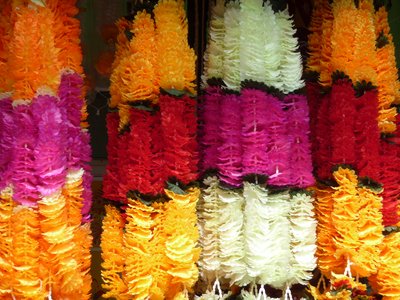 Sheila is standing next to the world's biggest joss sticks in Penang, Malaysia. These incense sticks gave off enough fumes to ward off even the most evil of spirits - and all of the neighbourhood mosquitoes. 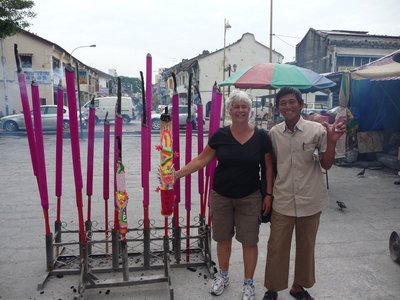 These are clay pots that are used universally in South East Asia for making hotpots - soups and stews cooked over charcoal embers. (Maybe Sunstone Pottery on Gabriola could start a new line - Graham?) 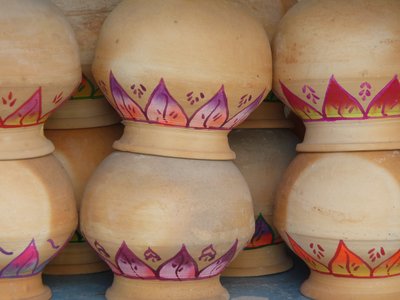 This is a carved watermelon on the Christmas Eve buffet in Kuala Lumpur. Fruit and vegetable carving is a major art form in this part of the world and Jim has bought all the necessary tools - all he needs now is ten years practice. 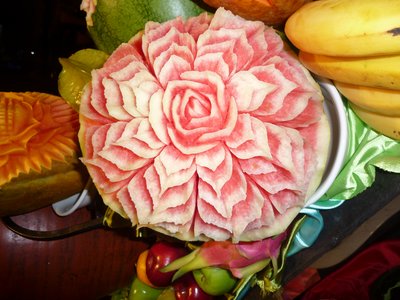 Today we leave Bangkok for another beach holiday. We are flying south to the balmy island of Koh Samui to top up our tans before heading to grey old Europe.

A Bit of a Puzzle

Looking through the hundreds of photos of our trip has left us with something of a puzzler - what on earth are some of these strange objects?
Can you help? Can you identify these images?

If you correctly identify all six images you will receive a special gift from Thailand.

"Blessed with an idyllic location, Kanchanaburi is nestled between stunningly beautiful limestone peaks and the pretty Kwai river. The peaceful atmosphere ...." Whoa! Hold on a minute. Who wrote this stuff? Not us - that's for sure. And not anyone who's recently visited the site of the infamous Bridge over the River Kwai in central Thailand. Take a look for yourself at the bridge that cost the lives of sixteen thousand allied servicemen and more than a hundred thousand Asian slaves in 1942/43. 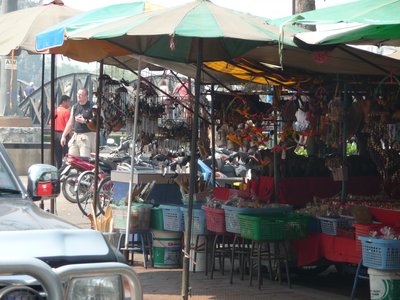 See the bridge? It's right there behind the trashy windchimes; just to the left of the hoop-la stall; directly in front of the All-American Country & Western Lounge and Coffee Bar where the waitresses wear leather skirts and cowboy hats peppered with rhinestones - Yuk!
Still can't see the bridge? Here's a shot from the river. It's just beyond the hundreds of gaudy floating disco bars and restaurants. 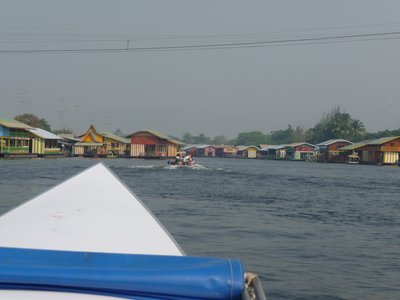 No? Well here's a picture of the bridge on the wall of the massive jewellry market - featuring over 200 vendors. 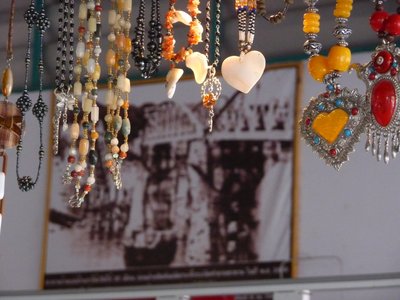 From here you can elbow your way through the "T" shirt and "Kiss-me-Quick" junk stalls, then make a run past the scrummage of postcard and guidebook touts, and you will finally see this lasting monument to the futility of warfare.
Nearly a quarter of a million prisoners of the Japanese Army built the Burma Railroad, known as the Railway of Death, through the steamy jungles of Thailand and Burma. Almost half of the workers died in the process and it is said that every sleeper (tie in Canadian), cost the life of a man. Many thousands of allied servicemen lie in the war graves of Kanchanaburi. This is very sad - but sadder still is the fact that the railway has today become mired under a thick sludge of crass commercialism.
As for the peaceful idyllic location written about in our travel guide? We found it, a few miles downstream from the Bridge, on Kasen Island - a tiny retreat far from the jubilant hoards and get-rich-at any-cost merchants. On Kasen Island, under the frangipane and mango trees, where only the sweet songs of birds and the occassional splash of a jumping fish disturb the air, we found the peace and tranquility that this tragic place deserves. It is here that these young men should be remembered - and we will remember them. Here is their legacy as it should be seen. 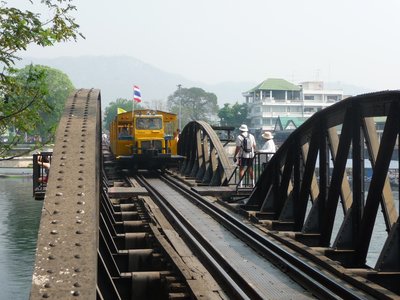 It's market day everyday in South East Asia. Whilst western supermarkets like Tesco and Carrefour are quickly setting up shop to take advantage of the burgeoning middle classes, the majority of locals still shop daily in the teeming markets. Today we visited a big one - a really big one - a bloody enormous one. Chatuchak Market in Bangkok has 15,000 stalls catering to nearly a quarter of a million shoppers a day. It's so monstrous that it has its own skytrain and subway stops and enough public toilets to satisfy even the weakest of bladders. So, ths is not your regular Asian market. Where are the rats and the scavenging dogs? Where are the barrow-boys peeing against the back of the food stalls? This place is about as sterile as Nanaimo's Farmers' Market and is full of touristy junk aimed at us Falangs, (note that now we are back in Thailand we are no longer Bule's). 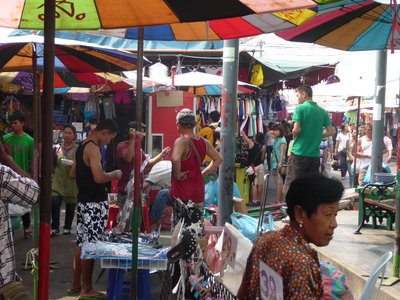 We are not really market people - although Jim always loves an excuse to graze for food - but what we really enjoy is the authentic local market like this one in Hoi Anh, Vietnam. 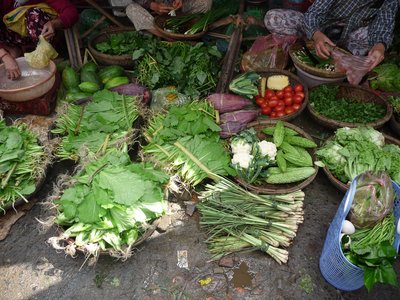 A picture may be worth a thousand words, but it would take a million words to convey the true ambience of this market. Imagine a rat-infested Elizabethan market in Olde England; the air rancid with the stench of fish and rotting vegetables. Picture old women with bent spines and arthritic fingers struggling to display their wares as they have done for the past sixty years or more. Envisage gaily dressed younger women, with huge baskets of produce balanced on their heads, sashaying through the impossibly narrow lanes with the grace of flamenco dancers. Listen to the shouts of barrow-boys as they maneuvre heavy pushcarts and motorbikes laden with produce, and with animals and fish – dead and alive: chickens, ducks, pigs, dogs, cats, rabbits. Flowers, fruits, vegetables and spices are piled in such abundance that they overflow the stalls and baskets and litter the muddy alleyways. The smells are incredible and everchanging, and you are constantly sideswiped by aromas so pungent that they flood your brain with memories - not always pleasant. If it smells like poop, it probably is - but it may just be the stinkiest of all fruit - the Durian. If you would like to experience the true smells of an authentic Asian market - stick your head in a bag of garbage that has been in the sun for a few days. But don't get the iea that we don't like the markets. We love the hustle and bustle and the feeling of aliveness as all of the senses are assaulted siultaneously. 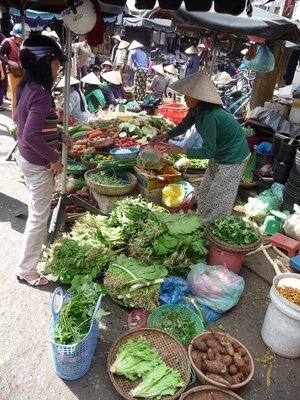 Many of the markets specalise in livestock; crammed with horrible little wire cages filled with monkeys, pet rats and giant fruit bats, together with wicker baskets of snakes, frogs and lizards and every imaginable variety of bird .
The most famous is the bird market in Yogyakarta, but we were warned off because there had been several deaths from bird flu. Then we read in the Jakarta Post that the Indonesian Minister of Health refused to notify the World Health Organization about the prevalence of bird flu because she claimed that the WHO would use the information to develop a vaccine that Indonesians would be unable to afford – Honestly!

We are now leaving Bangkok to visit one of the world's most infamous places - the site of the Bridge over the River Kwai.