Theatre of the Absurd

While possibly politically incorrect, we’ve previously equated revered cultural events with sporting conflicts. Our excuse is that some spectacles are so bizarre that they deserve a touch of ridicule. However, the international cross-border gate-slamming match that takes place here every evening is taken so seriously that we dare not lampoon it. Here are the spectators on the Indian side … 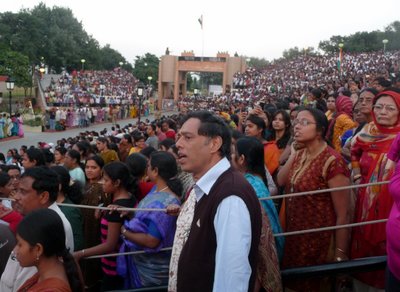 Roughly ten thousand people show up for every game – many travelling the 30 kilometres from Amritsar sardined ten deep into motor-rickshaws designed to carry three. We took the VIP taxi with just eight adults, a child, and a hot-rod driver. Sheila’s fearful shrieks alarmed the other passengers but didn’t faze the driver.
As the Pakistani spectators filled the stands on the other side of the border our team took to the field. Here they are –the All India Gate Slamming Champions 2010. 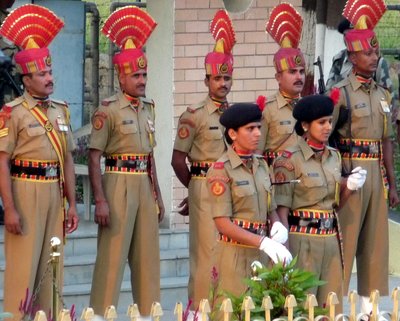 But wait …the referee has spotted a hitch…the border gates between India and Pakistan are already closed. No problem. To the deafening cheers of the Indian supporters, a couple of female team members quickly rush to open them. Now we can see the opposition – and a fierce lot the Pakistanis appear. This could be a tough match for the Indians, (who actually prefer to be called Hindustanis).
A super-enthusiastic MC whips the crowd into a frenzy with chants of, “Hindustan forever,” and India take the first point by slamming the gates shut again. Now, in a scene reminiscent of Monty Python’s Flying Circus, the two teams vie for points by out silly-walking each other. The lanky players march towards the gate at break-neck speed while stopping occasionally to kick their foreheads with their right feet – honestly, (and unbelievably). The crowd goes wild with shouts of, “Hindustan for ever.” While, at the other end of the field we hear the Pakistanis’ response. We like to think they’re shouting, “Pakistan forever,” but in view of the cross-border animosity between these two teams we’re not sure that it isn’t something rude.
Here's the moment when the gate slams - exciting isn't it? 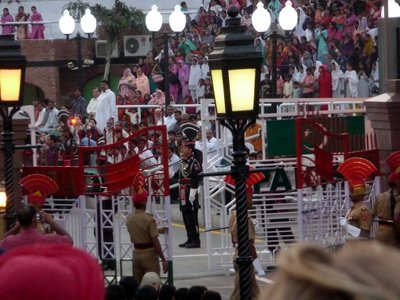 And then, after several minutes of posturing and nasty face pulling, both teams viciously haul down their flags, the captains shake hands, and, to an enormous roar from both ends of the stadium, they slam the gates shut. That’s it: match over – the border is firmly shut for the night. God knows who won, but our lot, the Indians, certainly feel that it was their game, and we all race back to Amritsar in triumph. Sheila’s shrieks of alarm at the numerous near-misses were lost in the medley of jubilant horn blowing – a good time was had by all.
Encore!!
One international gate-slamming event might be enough for any tour of India, but we’re gluttons for punishment. So, a few nights later, we accompanied our Indian relatives to the border 200 kms away in Firozpur, where the ritual was repeated. However, the border with Pakistan has been completely closed at Firozpur for 40 years, so, when the guards on each side puffed out their chests, pulled threatening faces and fiercely kicked the air in an attempt to intimidate each other, we had difficulty not laughing. But then, what had been just an amusing entertainment at Amritsar became a total pantomime when we realized that there was no border gate – it was like watching the World Cup Final being played without a ball. After a few minutes of goose-stepping around like prize cocks the soldiers must have realized the futility of the exercise and they quickly pulled down their flags and stomped off. That was it – the border which never opens is now closed. It was a draw – but don’t worry, the soldiers and the crowds will be back tomorrow, (and the day after etc. etc.etc.). They’ve only been doing it since 1947 - who knows if a winner will ever emerge. 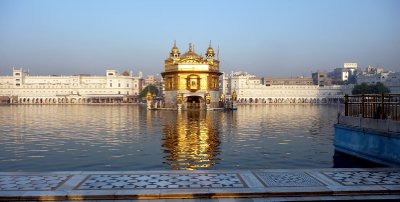 The Sikh temple in Amritsar really is golden, and millions flock here every year praying that some of the 750 kilograms of pure gold leaf will rub off on them. We visited at dawn when the temple was iridescent in the sun’s warm crepuscular rays…
Sheila dressed up for the occasion... 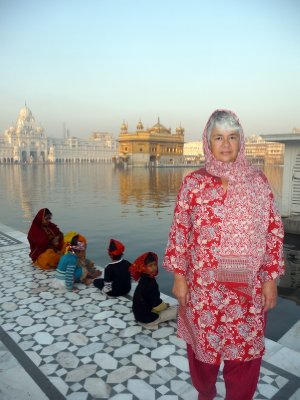 … and we returned at night to witness the beautiful illuminations… 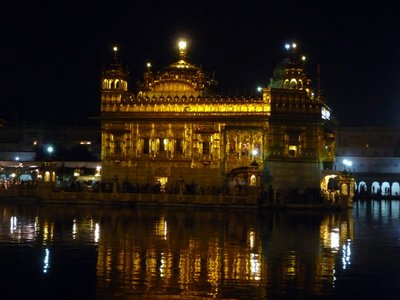 Amritsar’s gilded shrine is in the heart of the chaotic old city where thousands of tricycle rickshaws pedaled by ancient rickshaw-wallahs carry incredible cargoes through the overburdened streets. 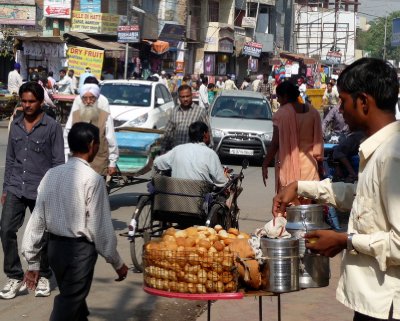 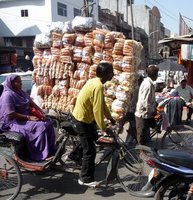 This guy is definitely overloaded, but we’ve seen worse. We’ve seen as many as six passengers on a tricycle made for two.
Almost everything here is on wheels of one kind or another and almost everyone travels in rickshaws. 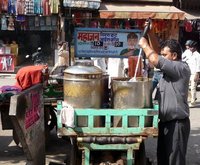 Not everyone can afford a bike and scrawny horses still pull the heaviest loads. Here’s the wood merchant… 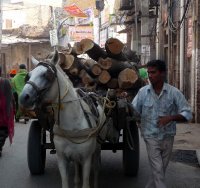 Punctures are frequent, but can be easily fixed while you wait at the roadside… 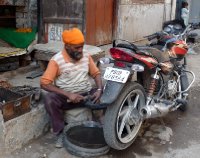 But all types of business is conducted on the street. Jim needed his new trousers shortening an inch or so – no problem for this tailor. Just one dollar and we only waited a couple of minutes… 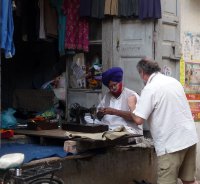 You can even get your teeth cleaned on the street – if you want. This man will do it while you wait! 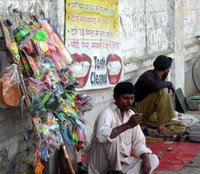 This is the Punjab and the Punjabis we’ve met have been kind and helpful, and nearly all have a brother, uncle or cousin who lives in Vancouver. A painter spotted us sitting in a café window and wanted us to take his photo. So here he is enjoying his 15 seconds of fame.

The eternal chaos at Delhi station was exacerbated when our train arrived with the carriages in reverse order. A thousand passengers with reserved seats were at the wrong end of the seemingly endless platform and, in a frantic dash for the right end, collided with the passengers coming the other way. The train was full but as we had accidentally booked 4 seats we had room to stretch on the ten hour trip, (it should have been 7 hours but who’s counting?).
Here’s a Chai wallah on the train… 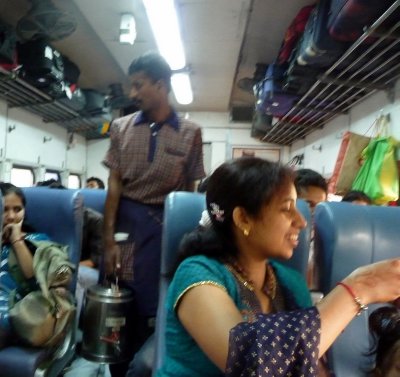 These tea boys constantly sing “Hai Chai! Hai Chai!” as they lead a never-ending procession of food purveyors up and down our train; the express to Amritsar. Chapatis, pranthas and rotis are offered on greasy scraps of old newspaper, (they’re big on recycling here), while others tout bags of popcorn and packets of massala flavoured potato chips. At 20 cents each item you can get stuffed for a dollar.
Railways are often carved through the ropiest of urban landscapes, but the squatters’ shanties surrounding Delhi are dismal even by Indian standards. Patched canvas and ragged tarpaulins cover miles of railside embankments and children scavenge in the garbage and swampy scrubland alongside the pigs, goats and cattle. All the city’s streets end at the railway line and all garbage is shovelled into mounds at the end of the street where it flows like multi-coloured glaciers onto the railway and into the arms of the squatters. We’d love to show you pictures but our train windows are as grubby as the peasants scrabbling for a living amongst the rubbish.
Away from the city the dusty-green fields of corn, wheat and sugar-cane, are splashed with golden marigolds and with the brightly coloured saris of the women harvesting the crops. Entire fields of wheat are scythed, threshed and winnowed by hand – men and women are still much cheaper and more plentiful than machines in this part of the world – and, as the wheat stubble is burned, the setting sun turns blood red and disappears into the acrid haze long before it hits the horizon.
Dimly lit stations come and go in an otherwise dark landscape, and the food merchants replenish their stocks and change the menu for the next leg. We travel from lunch, through tea, to supper, and worry that we might need breakfast if we lose more time. But we are the fortunate ones – we are on the air-conditioned express train where all seats are reserved and no-one stands. We pass many packed local trains, where hundreds hang out of windows and cling to open doorways, and we are thankful that we could afford the 15 dollars to take the best train. (Yes- that’s a total of $15 for 2 for the 500 kilometre trip from New Delhi – Amritsar!) 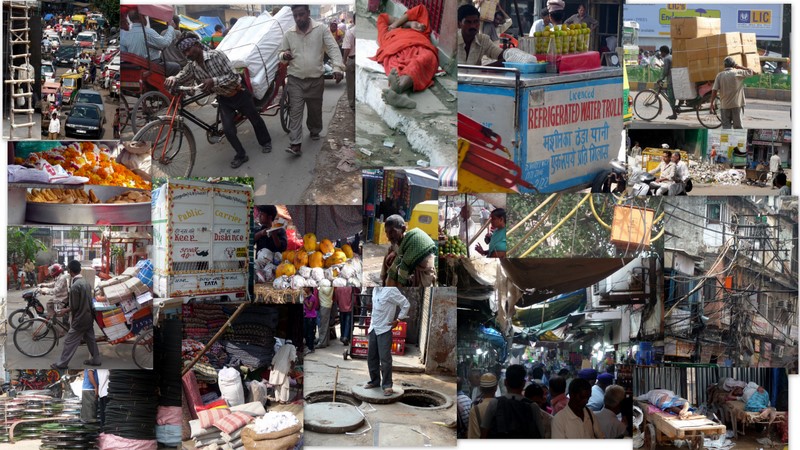 The crumbling buildings and booby-trapped lanes in Old Delhi offer a bewildering jumble of images that can’t be captured in a single photo – or even a thousand. Add to this kaleidoscopic mish-mash a cacophony of sound and an onslaught of fumes and perfumes, and you are hit by more sensations per second than a runaway roller-coaster ride.
It will be Diwali in two weeks and Indians are gearing up with the same fervor as westerners prepare for Christmas, Thanksgiving, and Canada Day combined. Food, gifts and fireworks are flying off the market stalls and printers have signs up saying, “No more Diwali card orders – we’re fully booked.” But the fireworks are still being churned out by the million, and dozens of factories and stalls are crammed dangerously into a tight maze of squalid passages just waiting for a careless cigarette. The hastily scrawled “No smoking” signs pinned to electricity poles are little deterrent; but just cast an eye upward… One look at the tangle of live wires above a firework factory told us that we should run.
Delhi is a work in progress – we’re just not sure if it’s being constructed or dismantled. Every building, sidewalk and vehicle seems headed for the scrapheap, and the roadsides are littered with broken down clunkers of all types. The manager of our hotel explained with a sigh, “Nothing works in Delhi – only the new Metro.” He’s right – but give it time!

The fresh welcoming face of India is Delhi’s stunning new airport terminal, built for the Commonwealth Games. It will be terrific (if it’s ever finished). However, the impressive, (almost monolithic) skytrain, designed to whisk athletes and spectators to the city centre in minutes, has completely run out of steam, and is likely to become the world’s longest white elephant. When the Commonwealth Games fizzled amid charges of racketeering, fraud and nepotism, any enthusiasm for actually finishing the line left with the last competitor.
The rest of Delhi seems to be in a similar state to the overhead metro line and the city is awash in partly finished projects obviously intended to show Delhi in a good light for the games – nice try! Maybe next time.
Following on with our stately home theme we’ve hooked a great deal at a Maharajah’s home. We even have the Maharajah Suite. Here’s just a part of it. 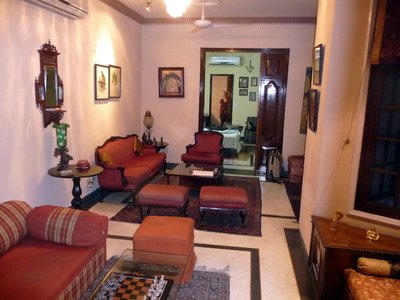 But wait … Cairo was noisy, but Delhi is simply deafening. Our home is easy spitting distance from a main road so I MAY HAVE TO SHOUT!
First impressions of Delhi – chaotic, dirty, splendid, exotic and loud. On the roads we’ve seen monkeys, horses, pigs, cows, bullocks, dogs, chipmunks and, of course, rats. We’ve mastered the metro, (the parts that are finished), been to Connaught Place, Janpath bazaar and India Gate… 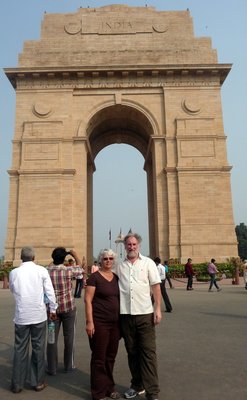 And we had tea in the Imperial Hotel – How much? Yikes! 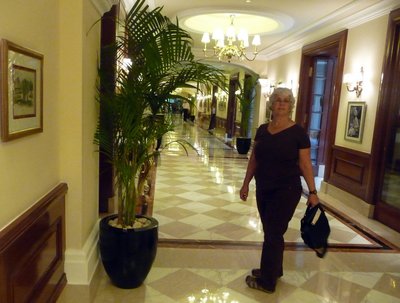 And that was only our first day.