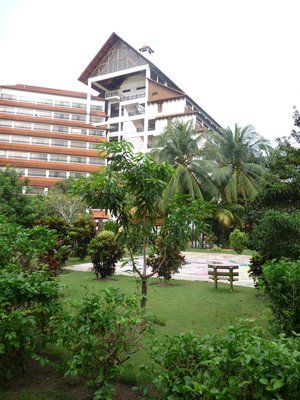 Cynics among you may wonder why we need a holiday at all - haven't we been lazing about in Southeast Asia long enough?
Here's a few stats that might change your mind: In the past eight weeks we have changed language, currency, customs and diet four times. We've slept in 28 different beds; taken countless planes, trains, buses, boats, taxis, tuk-tuks and cyclos. We've fought off a million touts and survived some of the worst traffic and pollution in the world. All of this just to amuse you with our blog!
So now we're on a break. After a slight delay when we discovered the car arranged by our Kuala Lumpur hotel was from "Rent - a - Write-Off" we hired another and drove through the jungles and rubber and tea plantations to the East Coast of Malaysia, where, we thought, we could escape the capital's teeming hoardes.
No such luck - they came with us, and most of them got here ahead of us. The hotels are packed with devout muslim families enjoying the true spirit of Christmas on the monsoon drenched beaches.
Las Vegas is here - enormous glitzy hotels and resorts that have an air of a Butlins' Holiday Camp. Fun-fairs, sticky food and tacky markets. And money - lots of money. The Malaysians are awash in oil money. The coast is littered with giant oil refineries and petro-chemical plants, and, judging by the size of many of the locals, they're eating the stuff. After living for eight weeks with the wafer thin elves of Thailand and Vietnam, we're the skinny-minnies here. No one is pointing at Jim and calling him a "Happy Buddha." These guys and gals could eat King Kong under the table - and we see them trying ... every morning at breakfast. 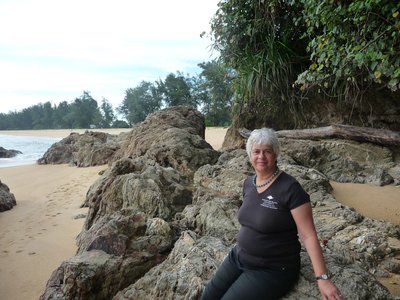 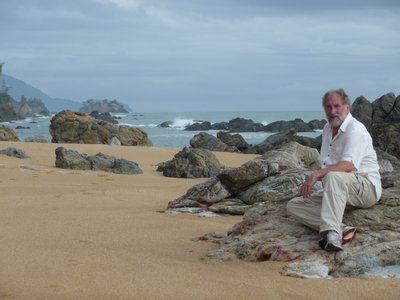 When Robin Williams starred in "Good Morning Vietnam" in 1987, he could never have visualised the incredible development that would take place in the following 20 years - high rises and urban sprawl as far as the pollution allows the eye to see.
Despite the United States' repeated attempts to physically and financially destroy the country over several decades, the resiliant and resourceful Vietnamese have triumphed. O.K. Let's be honest - the streets are a war zone, the rivers are sewers and construction appears haphazard. But it has its brightspots ... and it works.
And, as we mingle and talk to the friendly young Vietnamese, we marvel at how they and their country have both survived and thrived. The answer is that well over 50% of the population are too young to remember the American war - as it is called here. All they care about is the future and buying a motorbike - and we see that all around us. Twenty-seven million motorbikes are too many for one country to bear. They get everywhere. On our arrival in Saigon, (Ho Chi Minh City), we thought, "Great - unlike Hanoi the sidewalks are quite wide and not all used as motorbike parking lots." We were soon disillusioned. As soon as the traffic on the road gets too much, the motorcyclists simply take to the sidewalks - and what better way to go the wrong way up a one-way street?

On our last day in Vietnam we visited Cu Chi, a Viet Cong town where 16,000 people had lived underground in tunnels for 26 years - first to escape the French colonialists and then to avoid 50,000 tons of American bombs. Their tiny dirt tunnels snaked for 250 kms, joining underground kitchens, hospitals and living areas. Inhabitants emerged only to gather crops - until the Americans destroyed all the plant life with Agent Orange.
Here is Jim attempting, unsuccessfully, to get into one of the tunnels - his diet is going well! 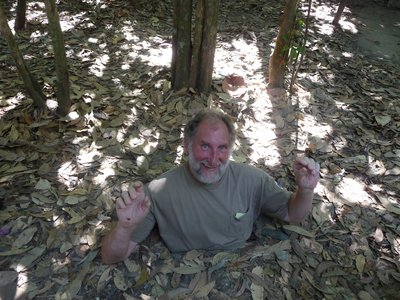 Now we have said goodbye to Vietnam, and goodbye to Steve and Melissa - two new friends from Melbourne whose company we enjoyed throughout our time in Vietnam - and arrived in Malaysia.
Kuala Lumpur is an oasis of sanity compared to the general mayhem of S.E.Asia. Obedient drivers let us cross the road without fear and without blaring horns; the streets and sidewalks are as clean and uncluttered as Vancouvers', the transit systems are fast and frequent; the soaring office towers and hotels are world class; the parks and gardens are manicured and beautiful. Yet - in many ways we miss the grime and chaos, the daily near-death experiences on the roads, the shanty towns and bamboo hovels sprouting satellite dishes. And we miss the friendly smiling faces of the Vietnamese youngsters and their jubilant greetings as they practice English.
Goodbye Vietnam - We wish you well. 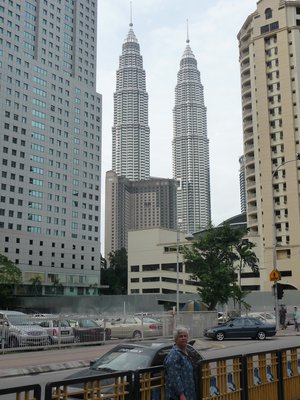