From the giant stone pillars at Stonehenge, the Roman baths in Bath, and the elegant Georgian squares of London, five thousand years of English history has been carved in English stone. However, on our travels across southern England we’ve come across some smaller, but equally significant, stone artifacts that have survived as reminders of life in a bygone age.
Do you know what these buildings and objects were for? 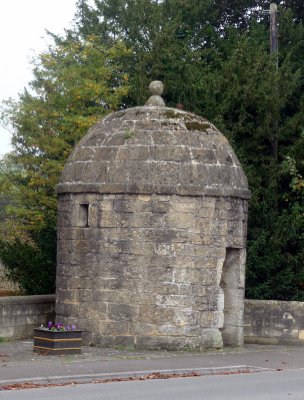 All small towns had one of these, usually in the middle of a river bridge.
Answer - It is a lock-up where prisoners and drunks were held till the magistrate arrived. 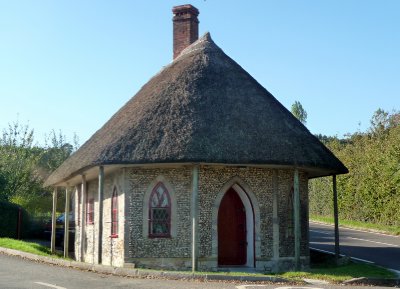 There were many of these roadside buildings – a few are still in use.
Answer - a tollgate. 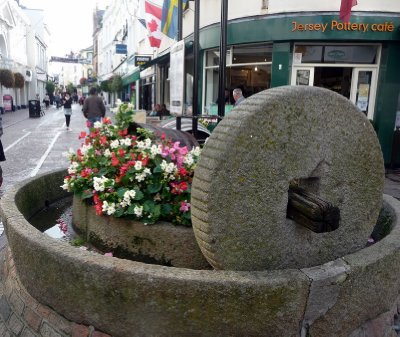 This could be a tight squeeze in Jersey.
Answer - an apple press for cider making. 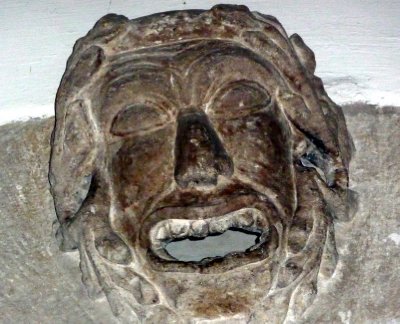 This is a “squint” but what was it for?
Answer - Squints were let into the wall high above the main rooms in medieval houses. The master, or a guard, could look down on the guests through the squint's mouth to make sure that no enemies were present. Hence the term, "Take a squint'" 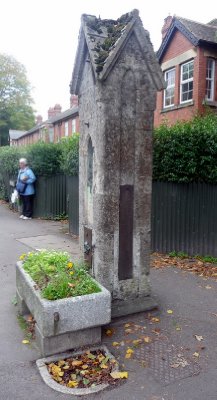 Thirsty? Neigh!
Answer - a horse trough.
This week’s prize is tea in Tiverton with a Tiller Girl - airfare not included. (Sorry we can’t arrange lunch with a lord).
The winner is Roy with the highest score - get packing Roy... tea awaits.

Tea in Tiverton and Lunch with a Lord

We've been to Devon - "God's wonderful country" according to the locals. And it is certainly beautiful. The warm Gulf Stream air sweeps in off the Atlantic and turns the fertile red soil into lush pastures for dairy cattle. Devon is famous for its cream and here is Sheila enjoying a real Devon tea of scone with clotted cream and strawberry jam in a Tiverton Tea Shoppe, circa 1678. 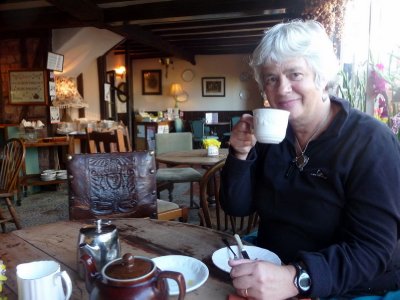 But we were not in Tiverton to enjoy ourselves. The ancient country town is the childhood home of actor/director Antony Holland, so we were meeting people from his past, including Dorothy, a delightful 92 year-old who played opposite Antony in a 1940 production of Emlyn Williams' "Night Must Fall." Such a meeting would have made our trip worthwhile in itself, but there was more - much more. In the annals of unforgettable moments it might not come close to having a baby or winning the lottery, but we had tea with a Tiller Girl and lunch with a lord. 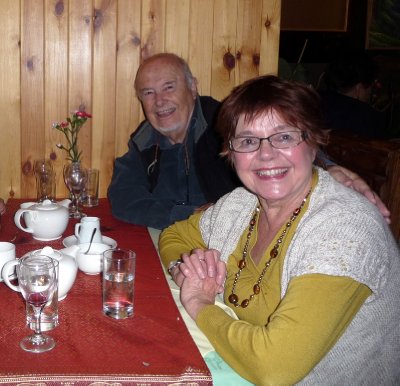 This is Irene , together with Antony Holland’s youngest brother, Kaye, her husband of 58 years. Irene used to be a Tiller Girl … and she made us some very tasty cheese on toast. For our Canuck friends: The Tiller Girls were a glamorous troupe of dancing girls who dominated British variety shows in the 50s and 60s. Their home was the giant stage at the London Palladium but television regularly brought them into every living room in the country. They could have been the girls next door … only with much longer legs, figures of angels and looks to die for … and they set millions of pulses racing as they high-kicked their way across the nation’s TVs week after week.
So, we had tea with a Tiller Girl in Tiverton. And, if that wasn’t enough, it was followed the next day by lunch with a real English Lord. This is his splendid stately home… 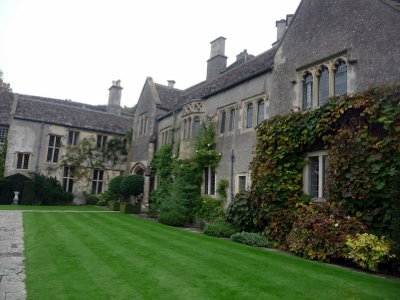 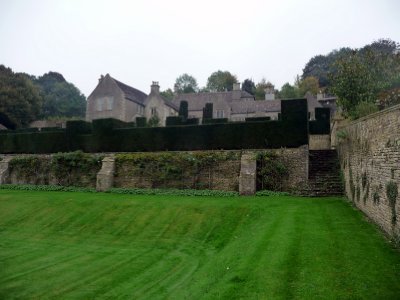 … while William Tyndale translated parts of the Latin bible into English here in the early 1500s.

Many of England’s great country estates are open to the public, but don’t expect a welcome if you turn up here without a gilt-edged invitation. However, Sir Victor, Baronet Killearn, son of the British Ambassador in Cairo during the war, rolled out the red carpet for us. He gave us the grand tour – here’s the splendid great hall… 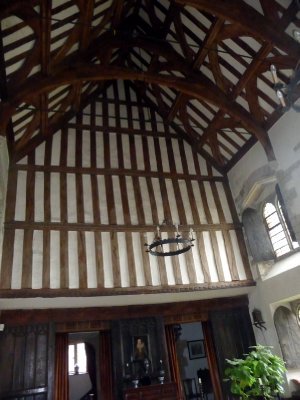 …and showed us around the extensive grounds. 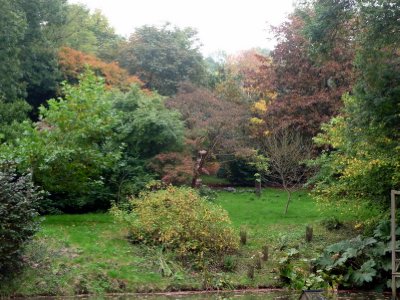 Then his staff served us a wonderful lunch of pork in mustard sauce with fresh garden vegetables, plum crumble and cream, and a decanter of vintage wine. What a day!! 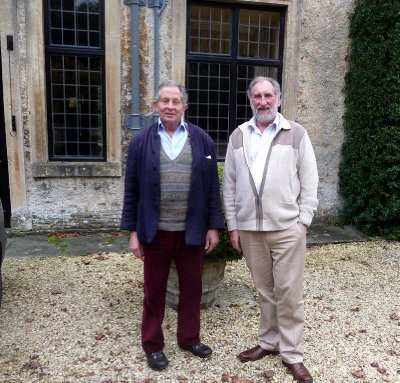 Thank you Victor, (we’re on first name terms now we’ve been to lunch).

We only spent a day on the desolate, mist-shrouded, moors of Devon, while many have been trapped for life behind these imposing granite walls... 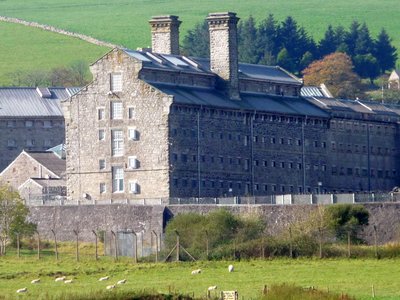 This is the infamous and supposedly inescapable prison at Princetown on Dartmoor. It was built in 1809 to house “Yankee” prisoners from the War of Independence in America and “Froggies” from the war with Napoleon in France.

Few men have ever escaped from this prison and those who have scaled the thirty-foot walls have been faced with miles of treacherous bogs and bone-chilling winds on the high moors. But, for us, the Devonian moors offered a starkly beautiful landscape criss-crossed by rushing brooks and meandering streams. This simple stone bridge at Postbridge has carried men and their beasts across this river since medieval times... 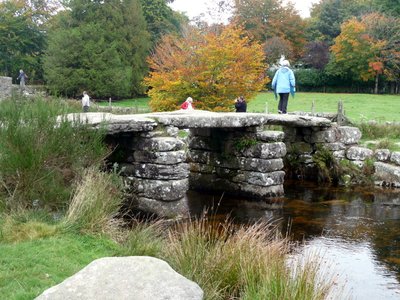 …while this wild pony is perfectly happy to paddle in one of the cool spring-fed ponds that dot the stony landscape. 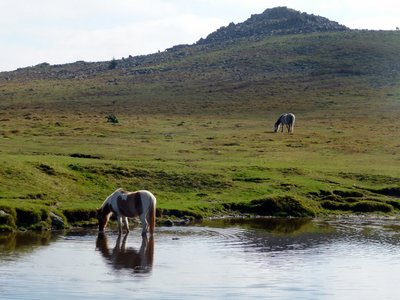 Almost every moorland structure here is stone and most are very old. These beautiful colonnaded almshouses in Mortenhampstead were built in 1637 as a Lepers' hospital… 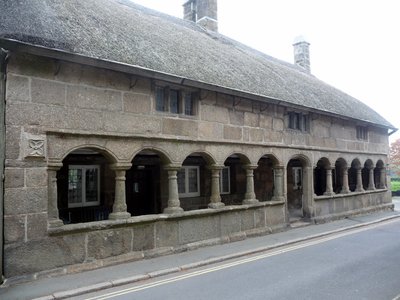 …and this ancient stone bridge was built long before Canada was a word. 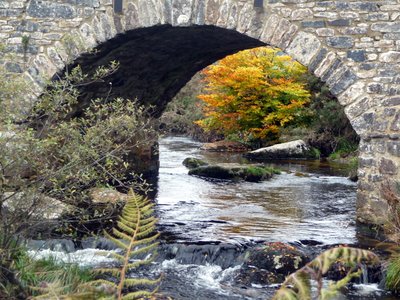 We are now headed for Plymouth to put the locals right about the Mayflower! So much history …and so little time.

The Queen of the Seas

Cunard's new luxurious cruise liner, Queen Elizabeth, is not a leviathan by today's standards. Only 2098 passengers will take the maiden voyage from Southampton this week, once Her Majesty has smashed a bottle of overpriced plonk across the bow. But it takes more than a bit of luck and a fat wallet to get dinner on this ship - you'll also need a very fancy wardrobe, a splashy hairdo and the family jewels. 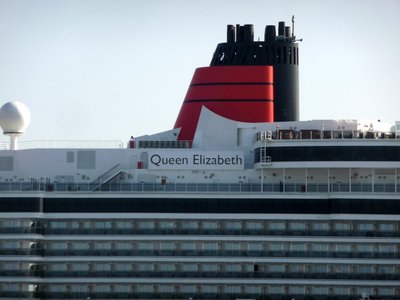 Southampton has for centuries been the epicenter of maritime England and it was the port from which James set sail as a young chef aboard another Cunard liner more than forty years ago. But Southampton has been the embarkation point for much more celebrated sailors than James. Here we are standing at the very spot where the Pilgrim fathers set sail for America in 1620... 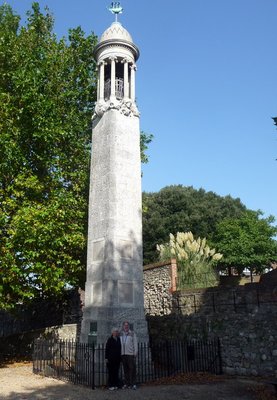 Oh-Oh! Did you think that the Pilgrim fathers sailed from Plymouth? Many people do. But, that's not true. The Mayflower and another ship, the Speedwell, set off from Southampton for America, and this monument commemorates the history making event. However, the Speedwell started to sink before she left the English Channel at Land's End. Both ships sailed back to Plymouth harbour, where the all the passengers were transferred to the Mayflower, and the celebrated ship sailed across the Atlantic alone ... that's one in the eye for Plymouth. And here's another... 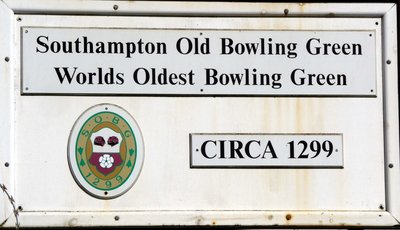 Yes ... When Sir Francis Drake decided to play a few ends of bowls on Plymouth Hoe while the entire Spanish Armada was gathering to attack in 1588, he thought he looked very cool and dead modern. But the good citizens of Southampton had been playing on this lawn for more than 300 years. 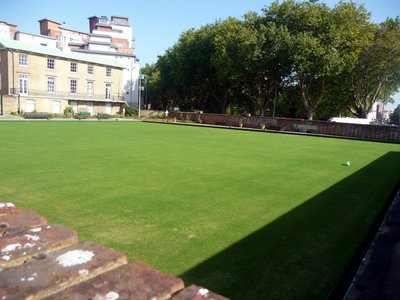 Sorry Plymouth - Southampton beat you again. And Southampton had another great historical first - the Titanic sailed from here. (But they don't boast about that).
Happy Thanksgiving to all our Canadian friends.

The Mysterious Affair at Melbury Court 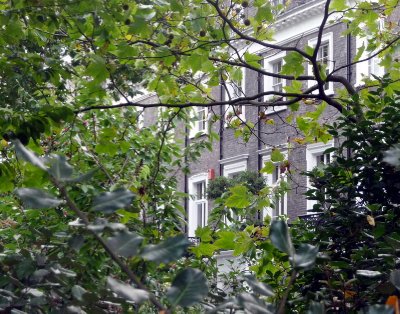 It was a dark and stormy night in deepest London..." (No...Really...It was).... when detective writer James explained his latest literary project to Caterina, his gracious host, in the elegant drawing room of her stately apartment overlooking a leafy Georgian square in Chelsea.
"I've penned many a mystery in my time," said James, turning from the rain slashing at the window, "But now I'm reduced to writing a biography of famous Canadian actor, Antony Holland."
"Oh! But I so enjoyed your mysteries," exclaimed a disappointed Caterina, pouring him a glass of Dom Perignon and sinking into the sofa beside him, "Surely there is a teensy intrique to whet my appetite."
"Alas," replied James, ignoring his host's pleading looks."I fear not ....unless?"
"Unless what...?"
And at that moment dear blog reader the events set in motion were so utterly improbable ... so totally unbelievable ...so completely bizarre ... that if James had actually written this in one of his novels no one would believe it. But, apart from changing names to protect the innocent, this is precisely what occurred:
James explained to our host that in 1941, during WW2, twenty-one year-old signalman Antony Holland of the British Army formed a theatre troupe in Egypt and produced a play at the Cairo Opera House - one of the world's greatest theatres of its day. All the performances were sold out with the profits going to a seviceman's charity founded by Lady Lampson, the Ambassador's wife. Lord and Lady Lampson, who later inherited the titles of Lord and Lady Killearn, attended one show a few days after the christening of their son, Victor, and congratulated Antony on his amazing performance in the leading role.
Jump forward nearly 70 years. We were packing for our trip when Antony handed James an original copy of the Cairo Gazette from December 1941, which carried a lengthy article about the christening of the Lampson's son in addition to two large adverts for Antony's play. Antony asked that if, while in England, we were able to track down Victor - now Baronet Lord Killearn - we could offer him the newspaper.
And, with a proverbial bolt of lightning, there was a revelation worthy of Hercule Poirot and Miss Marple combined as our host said, "That's no problem. Lady Killearn lives right next door."
To cut an amazing story to blog length - we've now met several members of Lord Killearn's family, will soon be in touch with Victor, and are still flabbergasted at the unbelievably incredible coincidence; in a city of 8 million people, in a country of 60 million, we ended up in the very next apartment to Lady Killearn.
With this kind of luck we should buy lottery tickets!

Now, for the first competition of this trip: 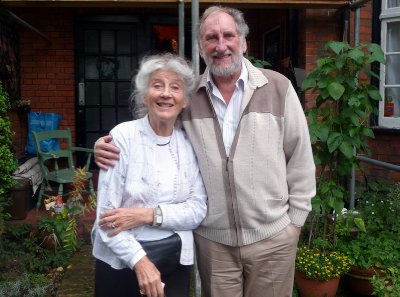 This is not Lady Killearn with Jim. This lady is much more famous.
Name this famous celebrity and you will win a gourmet dinner for two chez hawkson on our return from India.
The competition is now closed. Congratulations to Maxine and Janet for correctly identifying Phyllida Law, (Emma Thompson's mum).
and jointly winning 1st prize - see you in March.