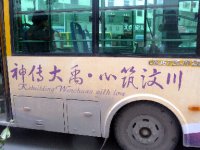 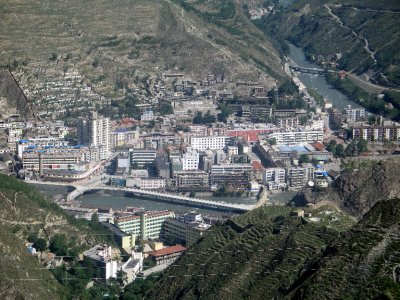 Wenchuan before the Earthquake

Wenchuan (or Wenzhuan) is the nearest city to Yingxiu. During our project we brought rural teachers from the surrounding areas into the city for training. We had become friends with our colleagues there and they had been in Canada for upgrading their teaching skills.
When the earthquake hit, it was these people we worried most about. The city was cut off for 6 days with no water or electricity; the roads and bridges were all destroyed; there was no communication with the outside world. Our colleagues told us of their frightening experiences during this time. Many buildings didn’t collapse, but had massive cracks, so people were afraid to stay indoors and slept outside. There was no visibility as the air was filled with dust from the rubble that had come down from the surrounding mountains. As the city is a regional centre for commerce and transportation the government prioritized it for reconstruction and, in the space of two years, the town has been rebuilt largely with money and the help of Guangdong Province in the south of China. During reconstruction people lived in temporary accommodation with no heating or running water and shared bathroom facilities.

Many ethnic Chinese live in Wenchuan especially the Qiang people 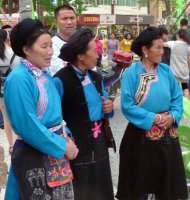 and the new town reflects their cultural architecture. 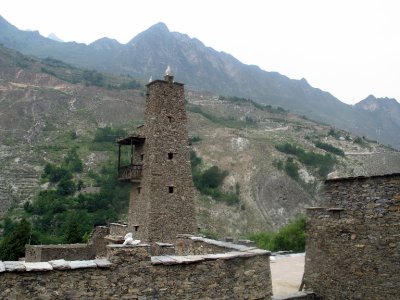 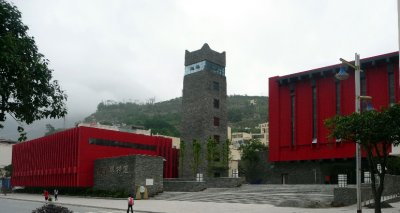 An open area has been provided for people to meet and relax in the new city, and every evening the place is full of dancers. There we met an enthusiastic young man, a project manager from Guangdong Province, working as part of the reconstruction team for the past two years. He was anxious to know what we thought of the new city and in particular the area where the people could enjoy themselves. We explained that we knew Wenchuan well and were very impressed with the city’s new look. We were amazed that so much had been accomplished in such a short time. 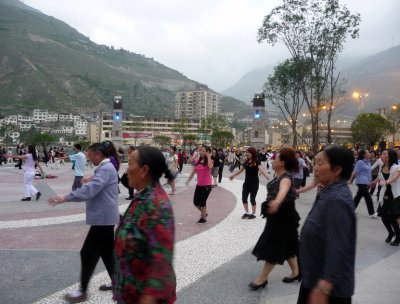 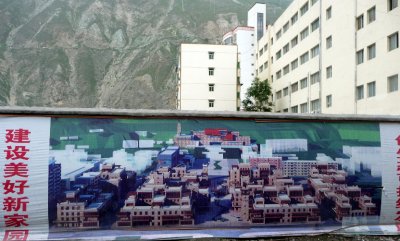 Throughout the city, there are posters which show the bright new future.

I have spent a great deal of time in China over the past 30 years but this visit has been the most poignant and memorable. And, while I am saddened that so many people were killed in the earthquake, I am heartened by the tremendous resolve of these wonderful people to rebuild their city and their lives.

The Rebirth of Yingxiu

On May 12, 2008, when we in Canada heard of the catastrophic earthquake in Sichuan province, we immediately thought of our friends and colleagues in the Wenchuan area. We felt so helpless, and it was weeks before we knew the full extent of the disaster and the identities of our Chinese colleagues who had died. People at both of our institutions immediately decided that we wanted to show our support. So, in consultation with our project partners in China, it was decided that we would raise money to provide a multimedia lab for the new Yingxiu Primary school. Vancouver Island University's efforts were spearheaded by Jennifer, our international activities manager, strongly supported by two Chinese students, Lisha and Haolei, and at Holland College by Jolene. Between the two institutions and their communities $30,000 was raised for the new lab.

As we approached the site chosen for the new primary school in Yingxui, we could see the remains of the nearby High School which was also devastated by the earthquake. 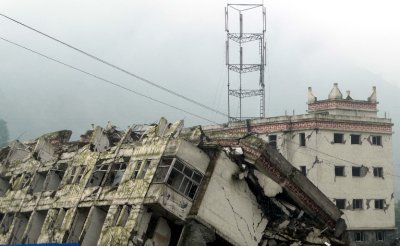 We were met at the new school site by the Vice Principal and 5 students. 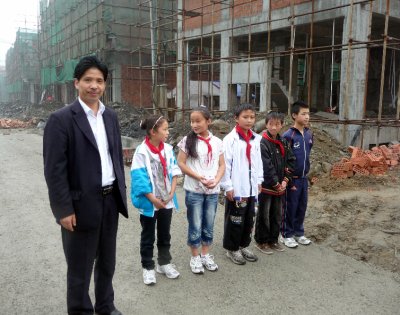 The purpose of our visit was to unveil a plaque to commemorate our donation.

In the part of the school which is already complete we were thanked by the VP and by one of the students who made a touching speech. 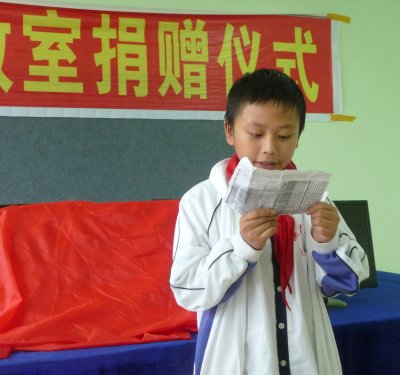 He said, (translation) “…We won’t forget all your kindness and support. All the students will use and benefit from this interactive lab, and our students will study hard and use the learned computer skills to reciprocate your care and assistance to us. I believe that along with your help and support we will have a better and prosperous future.
On behalf of Yingxiu Primary School, I thank you once again for all of your kindness and help. I would like to extend my warmest regards to all our friends at Holland College and Vancouver Island University. Wishing you all the best and a bright future.
From the pupils of Yingxiu Primary School June 27th 2010” 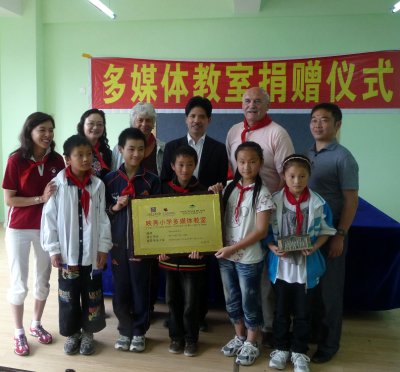 I felt privileged and honored to have been able to attend this occasion. While the school and the lab are not finished, because of the time taken to choose a new location and clear away the remains of the old buildings, the government is determined that the school will be completed by the beginning of the school year in September 2010. 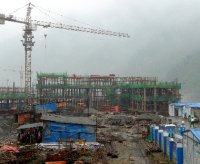 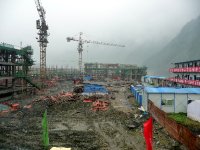 As we left we were each handed a small piece of rubble made into a memento as a sober and permanent reminder of all of the destruction which nature can cause.

If You Look Closely-Old China is Still There

I’ve been in China for the past few days and as the plane landed my mind went back almost 30 years to the first time I arrived in this country. It was a hot August night and the streets were crowded with people trying to cool off while playing mahjong and card games, or just chatting, under the dim street lights. The Cultural Revolution was over, but the devastating toll it had taken on China’s economy and educational system was evident everywhere. It was a world very different from the one I had left and, for the next three years as I rode my bicycle through those ancient streets, I felt like I was living on the set of an old Chinese movie. 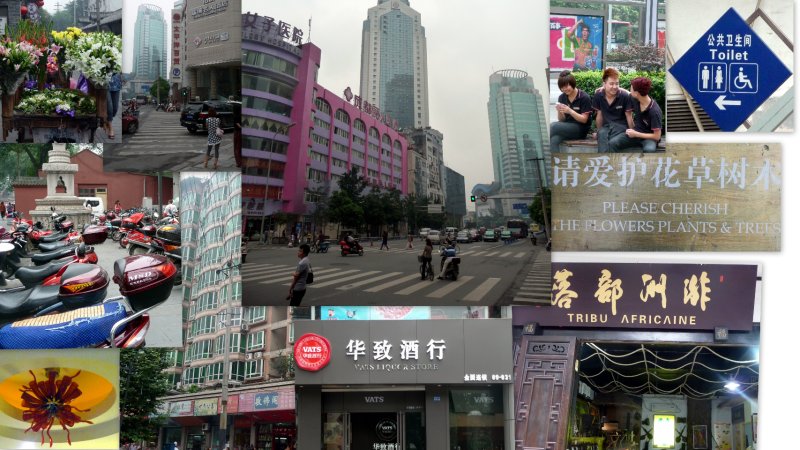 This time as I arrived in Chengdu, I found a very different place. Now the wide, modern roads are crowded with fast cars, the tall buildings are festooned with bright lights and the stores are full of products that would be at home in any Canadian mall. Today, Chengdu looks just like many western cities and, as I went to sleep in my hotel room on the 31st floor, I felt a little nostalgic for the old China. However, I discovered that even in this city of 8 million people I could still find remnants of the China that I had known in the 1980s. Just around the corner from my smart hotel is a bicycle repair shop and, nearby, an old-fashioned noodle shop. 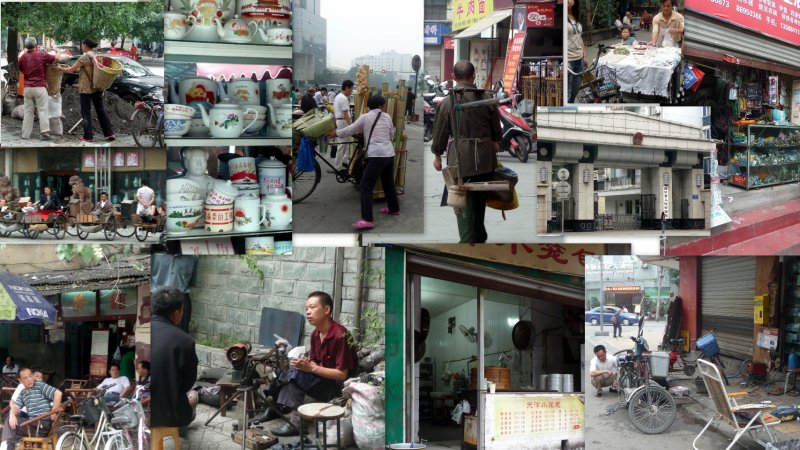 There are still a few cyclists, road sweepers and old men drinking tea on the sidewalks, and in a nearby market I found “little red books” and Chairman Mao buttons. 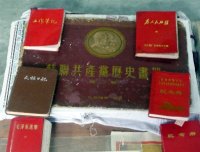 From Chengdu I went to the Primary School in Yingxui. Three years ago I visited this school to celebrate Vancouver Island University and Holland College’s successful completion of a five year rural teacher training project. The upgraded teachers demonstrated their new methodology and their pupils obviously enjoyed the student centred learning. I was greatly impressed as I watched the students working in groups and seeing the brightly coloured displays of their work. Here are some of the happy students as I saw them in 2007... 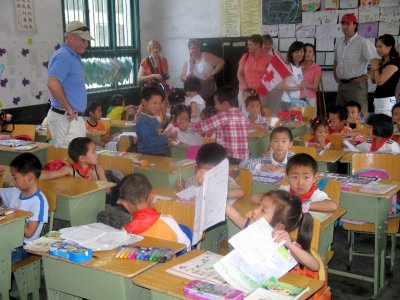 I could never have imagined that I would return three years later to mourn the loss of 222 of the 437 students and 20 of the 47 teachers. On May 12, 2008, Yingxiu was at the epicenter of the magnitude 8 earthquake that killed 80% of the town’s population. 9,700 people perished that day in this pastoral community of just 12,000, and all that remained of the school that I had been so pleased to be connected with was the flag pole.